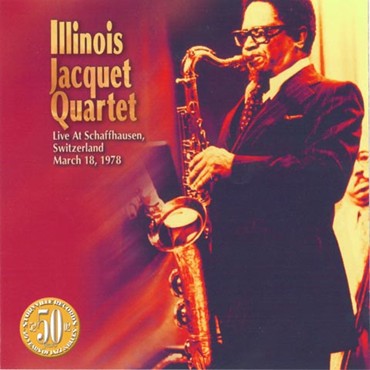 Jean-Baptiste Illinois Jacquet (October 31, 1922 - July 22, 2004) was an American jazz tenor saxophonist, best remembered for his solo on "Flying Home", critically recognized as the first R&B saxophone solo. Although he was a pioneer of the honking tenor saxophone that became a regular feature of jazz playing and a hallmark of early rock and roll, Jacquet was a skilled and melodic improviser, both on up-tempo tunes and ballads. He doubled on the bassoon, one of only a few jazz musicians to use the instrument. Jacquet was born to a Sioux mother and a Creole father in Broussard, Louisiana and moved to Houston, Texas, as an infant, and was raised there as one of six siblings. His father, Gilbert Jacquet, was a part-time bandleader. As a child he performed in his father's band, primarily on the alto saxophone. His older brother Russell Jacquet played trumpet and his brother Linton played drums. At 15, Jacquet began playing with the Milton Larkin Orchestra, a Houston-area dance band. In 1939, he moved to Los Angeles, California, where he met Nat King Cole. Jacquet would sit in with the trio on occasion. In 1940, Cole introduced Jacquet to Lionel Hampton who had returned to California and was putting together a big band. Hampton wanted to hire Jacquet, but asked the young Jacquet to switch to tenor saxophone. In 1942, at age 19, Jacquet soloed on the Hampton Orchestra's recording of "Flying Home", one of the very first times a honking tenor sax was heard on record. The record became a hit. The song immediately became the climax for the live shows and Jacquet became exhausted from having to "bring down the house" every night. The solo was built to weave in and out of the arrangement and continued to be played by every saxophone player who followed Jacquet in the band, notably Arnett Cobb and Dexter Gordon, who achieved almost as much fame as Jacquet in playing it. It is one of the very few jazz solos to have been memorized and played very much the same way by everyone who played the song.He quit the Hampton band in 1943 and joined Cab Calloway's Orchestra. Jacquet appeared with Cab Calloway's band in Lena Horne's movie Stormy Weather. In 1944, he returned to California and started a small band with his brother Russell and a young Charles Mingus. It was at this time that he appeared in the Academy Award-nominated short film Jammin' the Blues with Lester Young. He also appeared at the first Jazz at the Philharmonic concert. In 1946, he moved to New York City, and joined the Count Basie orchestra, replacing Lester Young. Jacquet continued to perform (mostly in Europe) in small groups through the 1960s and 1970s. Jacquet led the Illinois Jacquet Big Band from 1981 until his death. Jacquet became the first jazz musician to be an artist-in-residence at Harvard University in 1983. He played "C-Jam Blues" with President Bill Clinton on the White House lawn during Clinton's inaugural ball in 1993. His solos of the early and mid-1940s and his performances at the Jazz at the Philharmonic concert series, greatly influenced rhythm and blues and rock and roll saxophone style, but also continue to be heard in jazz. His honking and screeching emphasized the lower and higher registers of the tenor saxophone. Despite a superficial rawness, the style is still heard in skilled jazz players like Arnett Cobb, who also became famous for playing "Flying Home" with Hampton, as well as Sonny Rollins, Eddie "Lockjaw" Davis and Jimmy Forrest. Jacquet died in his home in Queens, New York of a heart attack on Thursday July 22, 2004. He was 81 years of age.

This CD contains 77 min. (15 tunes) of previously unreleased music, recorded live in Switzerland in 1978. Illinois Jacquet is a powerful Texas-style tenor saxophonist, with a unique style blending the sound of Lester Young and Coleman Hawkins, plus plenty of blues and rhythm & blues feeling. Jacquet's rhythm section is also comprised of major jazz stars: Hank Jones, George Duvivier and J.C. Heard. The repertoire is a tasty selection of jazz standards from the book of Basie, Ellington and Hefti, among others, plus a couple of originals. The CD showcases all facets of Jacquet's great talent: from the roaring "The King", to the gentle warmth of "Blue & Sentimental", to the down-home, wailing and preaching blues "Blues From Louisiana." The rhythm section is also featured throughout the program, especially the wonderful piano playing of the Teddy Wilson-inspired Hank Jones, who has two unaccompanied solo tunes.