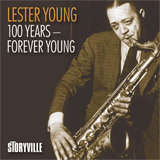 Lester Willis Young (August 27, 1909 – March 15, 1959), nicknamed "Pres" or "Prez", was an American jazz tenor saxophonist and clarinetist. He also played trumpet, violin, and drums. Coming to prominence while a member of Count Basie's orchestra, Young was one of the most influential players on his instrument. He played with a cool tone and used sophisticated harmonies, using "a free-floating style, wheeling and diving like a gull, banking with low, funky riffs that pleased dancers and listeners alike". Famous for his hip, introverted style, he invented or popularized much of the hipster ethos which came to be associated with the music. Lester Young was born in Woodville, Mississippi, and grew up in a musical family. His father, Willis Handy Young, was a respected teacher, his brother Lee Young was a drummer, and several other relatives played music professionally. His family moved to New Orleans, Louisiana, when Lester was an infant and later to Minneapolis, Minnesota. Although at a very young age Young did not initially know his father, he learned that his father was a musician. Later Willis taught his son to play the trumpet, violin, and drums in addition to the saxophone. Lester Young played in his family's band, known as the Young Family Band, in both the vaudeville and carnival circuits. He left the family band in 1927 at the age of 18 because he refused to tour in the Southern United States, where Jim Crow laws were in effect and racial segregation was required in public facilities. On December 8, 1957, Young appeared with Billie Holiday, Coleman Hawkins, Ben Webster, Roy Eldridge, and Gerry Mulligan in the CBS television special The Sound of Jazz, performing Holiday's tunes "Lady Sings The Blues" and "Fine and Mellow". It was a reunion with Holiday, with whom he had lost contact for years. She was also in decline at the end of her career, and they both gave moving performances. Young's solo was brilliant, considered by many jazz musicians an unparalleled marvel of economy, phrasing and extraordinarily moving emotion. But Young seemed gravely ill, and was the only horn player who was seated (except during his solo) during the performance. By this time his alcoholism had cumulative effect. He was eating significantly less, drinking more and more, and suffering from liver disease and malnutrition. Young's sharply diminished physical strength in the final two years of his life yielded some recordings with a frail tone, shortened phrases, and, on rare occasions, a difficulty in getting any sound to come out of his horn at all. Lester Young made his final studio recordings and live performances in Paris in March 1959 with drummer Kenny Clarke at the tail end of an abbreviated European tour during which he ate next to nothing and virtually drank himself to death. He died in the early morning hours of March 15, 1959, only hours after arriving back in New York, at the age of 49. He was buried at the Cemetery of the Evergreens in Brooklyn. According to jazz critic Leonard Feather, who rode with Holiday in a taxi to Young's funeral, she said after the services, "I'll be the next one to go." Holiday died four months later at age 44. 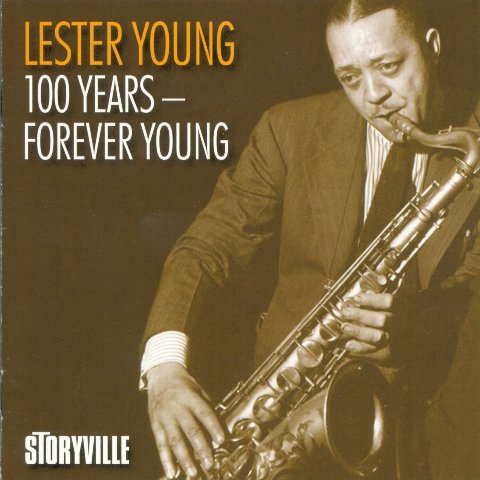 LESTER YOUNG 2 CD’s You can’t overestimate Lester Young’s importance on the development of modern jazz. His superb melodic gift and logical phrasing and smooth, flowing lines were the inspiration for most of the jazz musicians regardless of instruments born after 1920. (Lester Young born 1909) As Johnny Griffin said to Eddie “Lockjaw” Davis: There are five tenor saxophonists that have made the styles we all get our inspiration from: Chu Berry, Don Byas, Ben Webster, Coleman Hawkins and Lester Young. All the tracks on these two CD’s are from the fifties. Three of the sessions are unissued and on one track Oh! Lady Be Good young Miles Davis is on trumpet. It was recorded on a European tour Lester and Miles did in 1956.