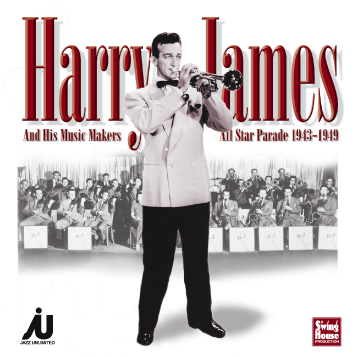 This double-CD is comprised of radio broadcasts made on the east and west coast of the U.S. during the years 1945-49. None of the music has been previously released on CD. The 2-CD contains 28 numbers, with a playing time of over 2½ hours. This is big band swing music (with a full string section), and therefore the repertoire consists mainly of swing tunes, along with pop numbers and a few traditional jazz favorites. Harry James was one of the greatest trumpet players of all time, as well as one of the best swing big band leaders of his day, who rose to fame playing in Benny Goodman’s orchestra in the late thirties. Joining Harry James are some of the top jazz musicians of the forties, including vocalist Cab Calloway, alto saxophonist Willie Smith, trombonist Juan Tizol and pianist Eddie Heywood. Almost sixty years after these recordings were made, the tight, swinging professionalism of the Harry James Orchestra is still a delight to hear.

Theme (Ciribiribin) Into the G Flat Special Begin the Beguine If That's the Way You Want It, Baby The Man I Love Harpie's Bazaar Kappa Sinche Hoinc (Business Men's Bounce) Dancing in the Dark Baby What You Do to Me Flashes Air Mail Special You Go to My Head Ee-Ba-Ba-Lee-Ba Between the Devil and the Deep Blue Sea It Must Be Jelly Mr. Co-Ed I've Never Forgotten There Goes That Song Again The Beaumont Ride Steel Guitar Rag Friar Rock Amor Keb-Lah St. Louis Blues Love and the Weather Rose Room The Back Beat Boogie 11.60 P.M. Strange What a Song Can Do Carnival Tuxedo Junction I Walk My Post in a Military Manner Queer Street Oh, Lady Be Good Where or When I'm Beginning to See the Light Ready Gal Jump A Blue Serge Suit with a Belt in the Back February King Porter Stomp Down by the Station I Got Rhythm Things Ain't What They Used to Be Brazil Chiarina Ya-Ta-Ta The Arrival It's the Talk of the Town The Eight Bar Riff