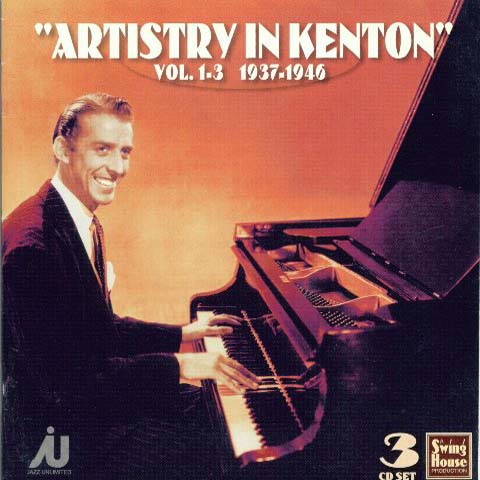 This triple-CD collection (spanning the years 1937-46) not only includes largely unheard facets of Stan Kenton’s early musical life, it also offers the greatest collection of very rare Kenton performances to date. Among the rare sessions included here are those from 1938 with the Vido Musso Orchestra and Herb Jeffrey, both of which pre-date the creation of Kenton’s own orchestra. Also included are some of the earliest performances by future jazz superstars such as Art Pepper, Stan Getz and Shelly Manne, plus the very first recording of vocalist June Christy. Also to be found here are occasional commentaries by Frank Sinatra and pertinent recollections by Kenton himself. Most of the music included on these three CD’s (74 numbers in all!) is original material of the post-swing/ ”early modern” genre, plus a few evergreens.

Stan Kenton And His Orchestra

Stan Kenton Identifies His Main, Influencing, Musical Personality, As Well As Identifying His Favourite Musical Instrument. Frank Sinatra Introduces High, Wide, And Handsome The Thrill Of You Cavernism Blue Night Misery Upsy Daisy Thanks for the memory Kenton Recalls The Most Exciting Day Of His Career The Harlem Folk Dance No Tears A Dirge In F Minor Blues Moon Mist The Memphis Lament It Seems To Me Two Moods You Alone Take The A Train Cloud Across The Moon Mine Sinatra Brief Commentary The Arkansas Traveler Two Guitars Tempo De Joe Sinatra Commentary/ Kenton Recollections Four Or Five Times Don't Worry Production On Theme (Kenton's Production Version And Orchestration Of His Adaptation Of The Ravel Melody Piano Solo) Danger, men blasting I'll be around Eager beaver Liza Hope introduces film star Gary Cooper to wild applause Pistol packin' mama Love, Love, Love Ride on Clair de lune Build it up and tear it down Moon song You betcha Five o'clock Special Delivery Opus a dollar three eighty The lady in red Taboo Wish you were waitin' for me Blow, jack None but the lonely Heart The hour of parting Tabby the cat Conversing with the brain And her tears flowed like wine (Original version) And her tears flowed like wine (Expurgated version) Sergeant's mess Are you livin' old man? Tampico Artistry jumps Just a sittin' and a rockin' Summertime Intermission riff It's only a paper moon Got a penny, jenny? Artistry in boogie Chinatown, my chinatown Painted rhythm My guy's come back I'll remember april Rika jika jack More than you know Artistry in percussion Sinatra observations on the ending of Kenton's "Artistry In Rhythm" phase. ARTISTRY IN RHYTHM PIANO SOLO from PRODUCTION ON THEME.