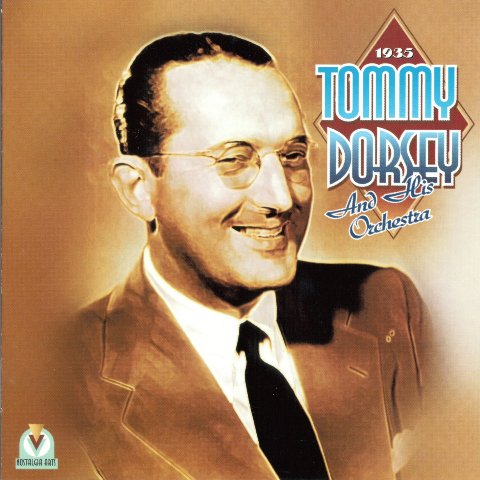 By the end of August 1935 the Dorsey Brothers’ Orchestra would be no more, instead there would be two Dorsey orchestras each of which was destined to become famous in its own right.The items recorded by the Tommy Dorsey Orchestra at this transcription session were for radio station use only and are probably fairly typical of those ‘used on dance dates. Tommy always had great respect for the general dancing public, and this is certainly reﬂected in the musical arrangements used at this session. Even at this early stage in the bands career, Tommy’s consummate skill as a trombone player was the main feature of the band, a skill which would eventually lead to him earning the unique appellation "the Sentimental Gentleman of Swing”. Dorsey's syncopation is smooth and lush with soft brass sectioning giving the leader full opportunity to step up for trombone soloing.

Tommy Dorsey And His Orchestra

Red Sails In The Sunset Sugar Blues Don't Give Up The Ship Bluin' The blues On Terasure Island Love song Of Tahiti Santa Claus Came In The Spring Pagan Star Where Am I? In The Dark Don't Mention Love To Me With All My Heart One Umbrella for Two It's Written In The Stars Thanks A Million I'm Sitting High On A Hilltop Alone Got A Bran' New Suit I'd Like To Take Orders From You I'd Rather Listen to Your Eyes How I Do Rate With You Two Hearts Carved On A Lonesome Pine Sing Before Breakfast I'm Going Shopping With You At A Little Church Affair