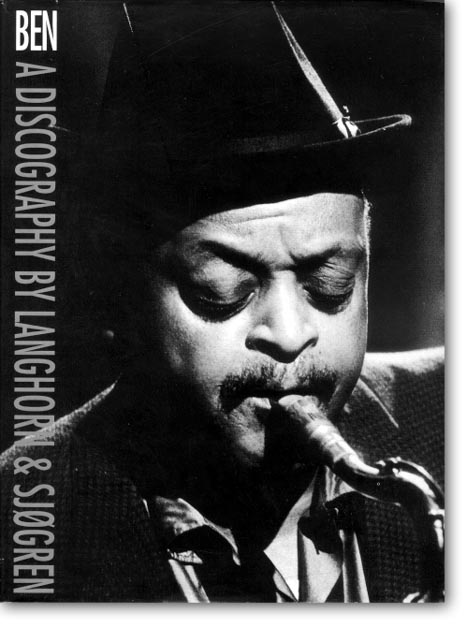 Along with Lester Young and Coleman Hawkins, recognised as one of the greatest tenor saxophone players of the swing era. He got his breakthrough during his years with Duke Ellington’s orchestra in the early 40’s. During the 50’s he often worked with Jazz At The Philharmonic, and from 1965, he lived in Europe (Denmark and Holland), where he worked as a soloist with various local groups. Died on September 20th 1973 in Amsterdam and was buried in Copenhagen. His Influence extends to many tenor players, most notably Flip Phillips. Paul Gonsalves, Eddie ‘Lockjaw’ Davis and Harold Ashby. Though two generations his junior, Scott Hamilton also carries on a lot of Ben Webster’s style. This book documents Ben Webster’s 42 year career as a recording artist, ranging from his 1931 recordings with Blanche Calloway to his final session, two weeks before his death. All his commercial recordings are included as well as radio and TV broadcasts and private tapes (when known), a total of 531 sessions, fully indexed including many previously unpublished photographs Hardcover with dust jacket A5, 288 pages, illustrated