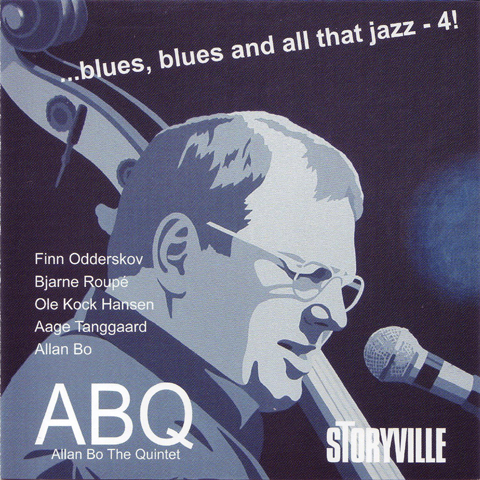 Blues, Blues And All That Jazz - 4

ABQ combines blues, swing and bebop with contemporary musical jazz language. The music leaves room for the individual musicians flourish as a solo artist, which is important, because the musicians in ABQ is one of the best in the industry. To display the width of the musical family: Blues and Jazz, was the variation was a keyword, because the Repertory should be determined for this CD.  Finn Odderskov - tenor sax. His career has placed him at the scene with important names such as Ben Webster and Dexter Gordon. Ole Kock Hansen-piano. One of Denmark's finest pianists and arrangers. He received the prestigious Django d ' Or price for his outstanding importance for Danmarks radio's big band. ABQ gets great inspiration from the musical Centre, that Ole always represents. Bjarne Roupé-guitar. Originally from Sweden, but still considered one of the great Danish guitar legends, such as through more than 10 years has played with all the big jazz musicians Aage Tanggaard-Drums. Has a rare talent to support his musical players with his elegant style. He provides, among other things, the pulse in the estimated Ernie Wilkins Almost Big Band and his professionalism is requested in both Denmark and abroad. Allan Bo-vocals and bass. Bandleader over the last 40 years and has also worked as a sideman for fine jazz names such as Finn Ziegler and Ben Webster. Colleagues have said: When he sings, then the roots from Harlem unmistakable and on the bass: he is ' steady as a rock '. Good Morning Blues Sister Sade That Lucky Old Sun Groovy Samba Unchain My Heart There'll Never Be Another You "You Don't Know Me Sweet Emma I Can't Give You Anything But Love, Watching The River Flow www.allanboband.dk