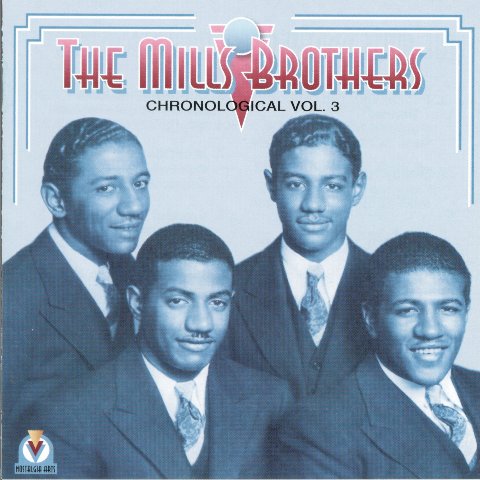 This is the third volume of six CD’s which chronologically cover the long and glorious career of The Mills Brothers – John, Herbert, Donald and Harry. This CD consists of 23 tunes – two recorded in London, the rest in New York and California – between March, 1934 and February, 1935. By the period 1934-35, The Mills Brothers were incredibly popular, both in the U.S. and England. This CD presents the four brothers at the peak of their popularity – and prowess – on Brunswick/Decca Records. Besides their sonorous vocal harmonies, The Mills Brothers were famous for their vocal imitation of musical instruments – no “real” instrumental accompaniment was employed, except for a guitar. Why The Mills Brothers were the most successful vocal group ever (their career spanned 52 years) – and are still very popular today – is readily apparent in the music presented here.

Put on Your Old Grey Bonnet Sleepy Head Lazy Bones Nagasaki Sweet Georgia Brown Old Fashioned Love Miss Otis Regrets Sweeter Than Sugar Ida! Sweet as Apple Cider My Gal Sal Some of These Days I've Found a New Baby Limehouse Blues Rockin' Chair Tiger Rag There Goes My Headache Out for No Good Lulu's Back in Town (Film Sound Track) Sweet Lucy Brown Don't Be Afraid to Tell Your Mother Since We Fell Out of Love Moanin' for You What's the Reason (I'm Not Pleasin' You?)