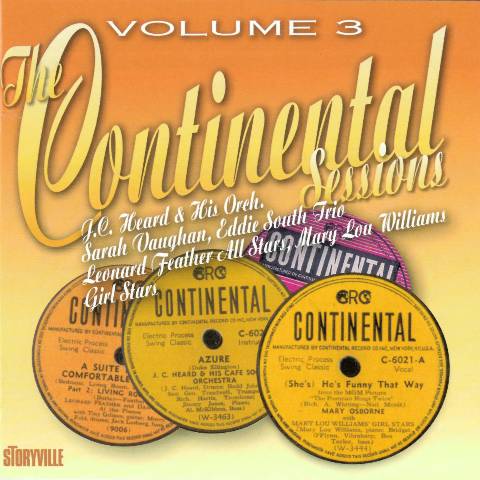 Two of the groups on this CD were existing bands (Eddie South, Mary Lou Williams); the other four were specially assembled for the Continental Records recording sessions. The music (28 numbers – 78 min.) was recorded in the Continental studios in 1944-46. The musicians – and the music – blends the best of the swing era with the best of the new emerging bebop era in jazz, and includes Sarah Vaughan’s first recordings in her own name. Leonard Feather’s All Stars were assembled from winners of the Esquire Jazz Poll and included trumpet star Buck Clayton, trad jazz clarinet master Edmond Hall and tenor giant Coleman Hawkins, as well as bop jazz bassist Oscar Pettiford. At this time in the mid-forties, both drummer J.C. Heard and pianist Mary Lou Williams were excellent examples of musicians who were stars in both the swing and bebop era, while trumpeter Dizzy Gillespie and alto saxophonist Charlie Parker were just getting established as the creators of bebop. While there are many highpoints on this 78-minute CD, some of the best are Sarah Vaughan’s wonderful young voice on ”Mean To Me”, and Coleman Hawkins’ tenor sax on ”Thanks For the Memory”. In its short life, Continental Records was successful in bringing together the top names in swing and bebop for some very exciting sessions, as this CD – and the previous two CDs in this series – happily reveals.

The Walk Heard But Not Seen Azure Bounving For Barney Scram Esquire Stomp Esquire Jump Thanks For The Memory Bedroom Blues Living Room Romp Kitchen Conniption Bathroom Blues What More Can A Woman Do I Rather Have A Memory Than A Dream Mean To Me Signing Off Interlude No Smokes East Of The Sun Eddie South Blues Twelve O'Clock Blues Swinging The Blues I Can't Give You Anything But Love ((She's) He's Funny That Way ((She's) He's Funny That Way D.D.T. D.D.T, (alt. take) Rhumba RE-Bop Blues At Mary Loud's