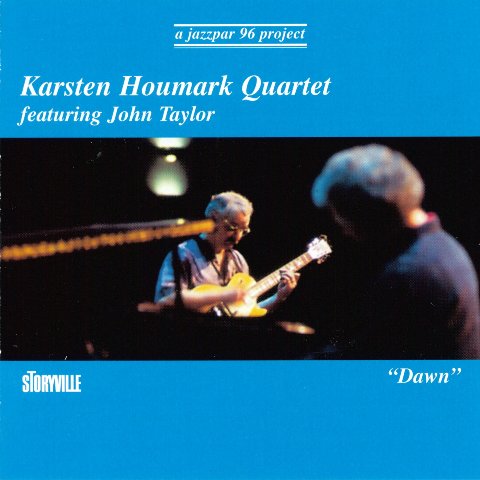 Unlike some Danish performers, guitarist and composer Karsten Houmark is not well-known abroad — at least, not so far! Throughout This CD, one can hear suggestions of the guitarist’s admiration for Metheny or Scofield or perhaps particularly John Abercrombie, but his style is organic, not an assembly of licks from other players. This feeds back to the subtle nature of the compositions, and the ways in which the rhythm-section of Lennart Ginman and Jonas Johansen contribute, in particular, cover the ground from aggressive interactive playing to delicate backgrounds to not playing at all on two tracks. One of these, on which John Taylor makes the grand piano first of all an ethnic drum and then a harp, grew from discussion between the duettists with nothing written down at all.The controlled, yet seemingly free flow of collective music-making, and the beautifully veiled sonorities of the leader’s own guitar, are at the opposite end of the spectrum from an Eric Clapton or a Frank Gambale. They convey the image of a thinking, sensitive, laidback performer who, instead of just being “a musician’s musician”, should now belong to everybody