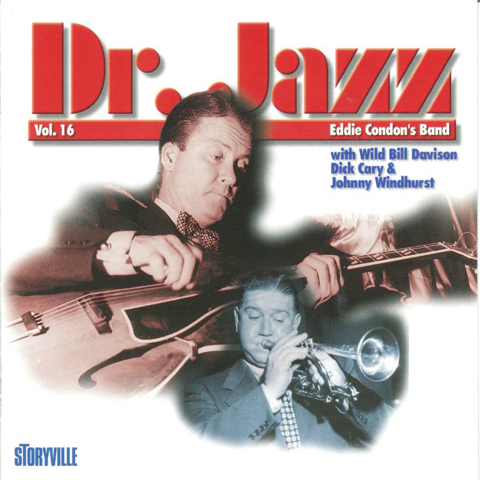 The 17 numbers on this CD were recorded live at Eddie Condon's club in Greenwich Village, NYC, between December 1951 and June 1952, a period during which Condon otherwise made no studio recorclings. The CD is divided into three segments, each featuring a different trumpet/cornet player: first, Johnny Windhurst; second, Dick Cary; and third, Wild Bill Davison. Condon, himself, is featured throughout the album. Wild Bill Davison's lusty, driving cornet-playing was a real crowd-pleaser at Condon's Greenwich Village club and also an important attribute of this &bum. Ralph Sutton's piano-playing is another solid plus. Last, but far from least, the CD is a wonderful showcase for Eddie Condon's guitar-playing. As a timekeeper and chord maker he was masterful, and the crystalline sound of his big-bodied Gibson guitar blends perfectly with the ensemble.