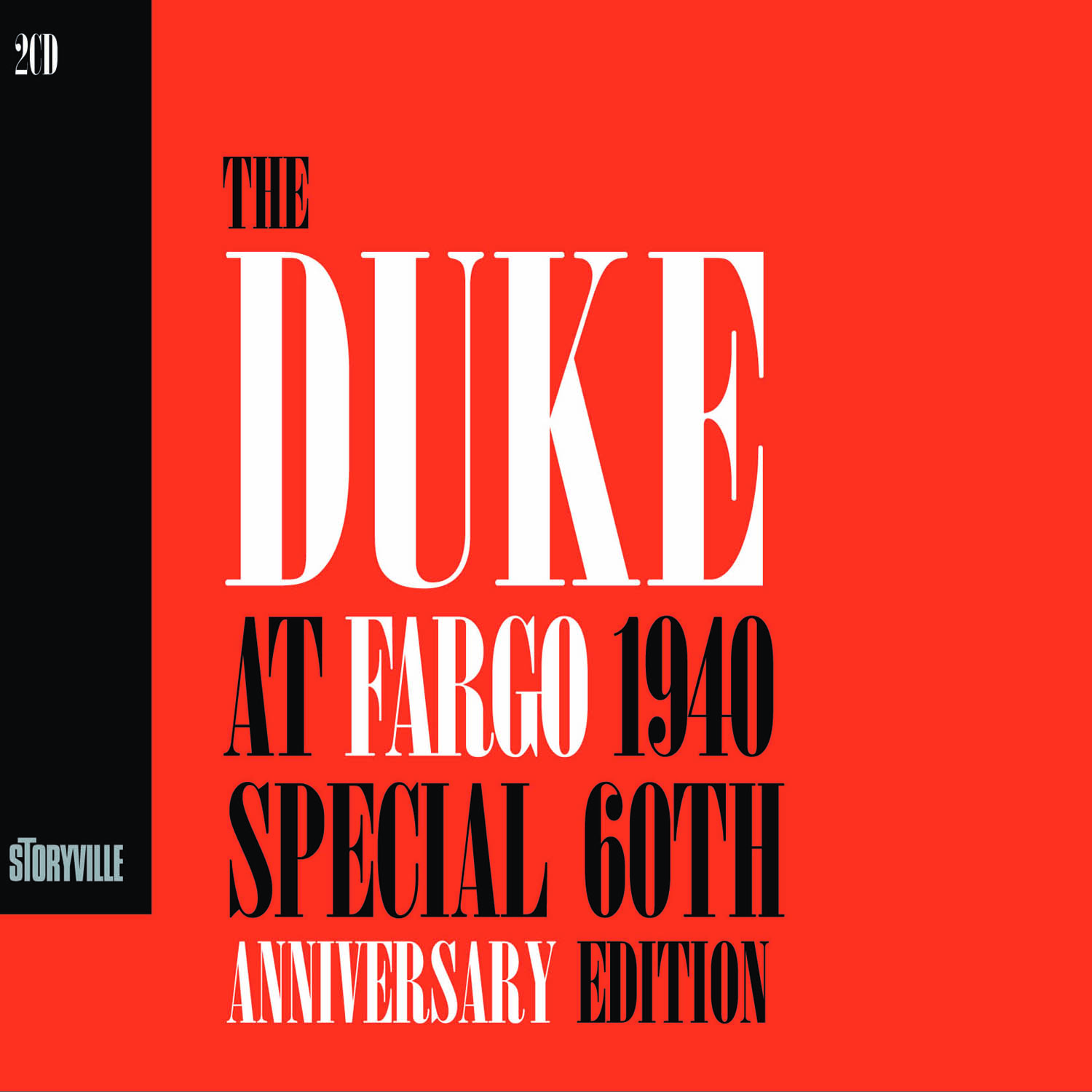 Our Fargo box set has been out of stock for a while but we are now ready with a re-release of this fine double CD now packed as a digipak.

This new edition includes:
“The Fargo Dance Date” by Jerry Valburn, “After Fargo” by William Strother, then a 19 year old Ellington-fan who happened to catch the band the very next evening after the Fargo date. His impressions of his first “live” exposure of the Ellington band and “Recording The Duke at Fargo 1940 by Jack Towers.

The Vintage Jazz Classics 1990 release of this milestone recording is disappearing. Storyville’s 2000 reissue was a welcome effort to keep the occasion alive. Apparently, the two-CD set will remain available. Ellington’s 1940-’41 band was his best from several standpoints. Customarily called by critics and historians the Blanton-Webster band, it found Ellington at a peak of composing and orchestrating creativity for a band of young stars that included bassist Jimmy Blanton and tenor saxophonist Ben Webster. He also had Johnny Hodges, Harry Carney, Rex Stewart, the newly recruited Ray Nance, Barney Bigard, Ivie Anderson, Herb Jeffries and the whole remarkable crew that make hearing the band one of the most satisfying experiences in modern music. Ellington was touring in the Midwest. The one-nighters included a dance at the Crystal Ballroom in Fargo, North Dakota. Some of the music was broadcast live. To the benefit of posterity, young radio engineer Jack Towers recorded all of it with three microphones and a disc recorder. Towers captured the verve and cohesion of the band in sound whose quality is remarkable for the time and under the circumstances. Cootie Williams had recently left Ellington to join Benny Goodman, but Stewart, Nance and Wallace Jones had no trouble keeping the trumpet section fires burning. The soloists are at the top of their games, with Hodges and Stewart frequently brilliant. Nonetheless, the evening’s first place honors go to Webster for two choruses of “Star Dust” that have imprinted on the minds of generations of listeners. If for nothing more than that masterpiece, this set is a basic repertoire item. But, of course, there is much more.

There are simply a certain number of jazz records that you have to hear and include in your collection. Likewise, there are specific small groups and big bands that everyone, not just jazz fans, but MUSIC and LIFE fans need to know about to understand civilization. Duke Ellington, who held together an orchestra for about half a century created a unique sound with his instrument, aka “The Duke Ellington Orchestra.” His 1939-41 band is considered the apex of their talent and vision. Loaded with Hall of Famers like Ben Webster, Johnny Hodges, Rex Stewart and Lawrence Brown and anchored by the sui generis Harry Carney, this band was blessed with the short-lived bass pioneer, Jimmy Blanton, who transformed the instrument from a rhythm to a solo instrument, changing the shape of jazz to come.

This band, like in Thornton Wilder’s Our Town, is captured on “an average” show, in that swinging jazz center of Fargo, North Dakota in November of 1940. That is what makes this gig so glorious, it’s just a regular day in heaven, with classics like “Caravan,” “Rockin’ In Rhythm” and “Sophisticated Lady,” being just another  part of the dance. Little did anyone know that they’d be dancing and wooing to music that would NEVER get better in Western Civilization. The first part of the dance was actually a radio broadcast, with the list of “Sepia Panorama” to “Pussy Willow” to “Chatterbox” to Mood Indigo” to “Harlem Airshaft  and ending up with “Warm Valley” being the best 30 minutes you’ll ever spend with sound. The harmonies of Ellington’s reed section, melded with the horns still, after thousands of listens by yours truly, continues to bewilder my mind. Then, there are chords produced by the orchestra during “Conga Brava” that can only be described as unworldly.

Then there are the soloists. Ben Webster. BEN WEBSTER!!!! He creates Moses in Chains on his tenor during “Star Dust,” while Harry Carney sounds like the La Brea Tar Pits on “Slap Happy.” Barney Bigard never sounded better here, as on “The Mooche” or “Clarinet Lament.” Rex Stewart on “Boy Meets Horn” does everything with his cornet valves except use them for a Volkswagon. Vocalists Ivie Anderson and Herb Jeffries are glowing as well.

Before my dear old dad departed to glory, he used to say that he had four questions to ask God when he finally saw Him face to face on things he didn’t understand while on this side of heaven. They were, a) The existence of evil b) The Trinity c) how Jesus could be God and Man and d) How Duke Ellington’s orchestra got its sound. “They’re all mysteries!” he’d exclaim. At least my dad now knows.  It’s that important.

These recordings are indispensable for all serious Ellington collectors and anyone seeking to understand the history of America's only truly native musical art form.

There's the sheer energy and audacity of the ensemble playing, every man on song and in the form of their lives. Oh yes, the sound is surprisingly good considering. Snap this up now!

This essential album shows how Ellington moulded a collection of individualists into what I consider the greatest jazz band ever.