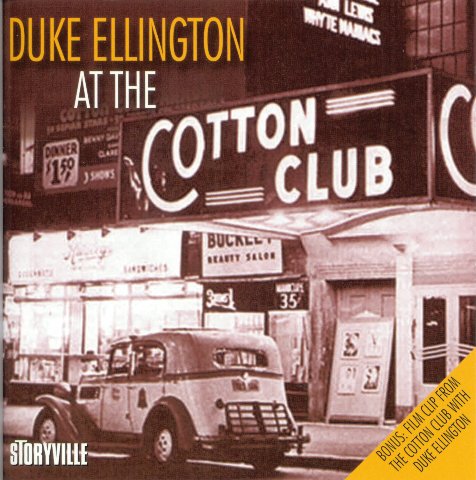 Did Duke Ellington make the Cotton Club famous or was it the other way around? The answer may lie somewhere in between, but few will dispute the fact that both club and bandleader became synonymous with Harlem, an area above Manhattan’s 110th Street where culture thrived and the music was hot. Impressed by the lights and energy of Harlem, Duke likened it to "Arabian nights" when he first arrived there from Washington, D.C. in 1922. That was also the year in which the Cotton Club opened for business at 644 Lenox Avenue, but although theirs was a marriage made in heaven, the two symbols of the Harlem Renaissance Era did not unite until 1927. The Ellington orchestra’s first run at the Cotton Club lasted into 1932, by which time Duke’s fame had spread far beyond Harlem and across the oceans. He rose to become one of America’s most distinguished and influential composers and the club became legendary. These two CDs capture the atmosphere and enduring musical sophistication of nine Cotton Club radio transmissions and include an April 29, 1938 broadcast of the band’s appearance at Stockholm’s Konserthuset. The latter was also a celebration of Duke’s birthday, of which there were many more to come. The second CD has a brief but engaging 1933 newsreel clip that shows Harlem’s Lenox Avenue and looks into the club for a glimpse of Ellington, the orchestra, and some of the famous Cotton Club dancing beauties. Nostalgia? Yes, but so much more.

Swing Session Solitude - In A Sentimental Mood Harmony In Harlem If You Were In My Place Mood Indigo East St. Louis TYoodle-Oo East St. Louis Toodle-Oo Oh Babe, Maybe SOmeday Dinahe's in A Jam If Dreams Come True Scrontch You Went To My Head Three Blind Mice Solitude Downtown Uproar Dinah's In A Jam On The Sunny Side Of The Street Ev'ry Day Azure Carnival In Caroline Harmony In Harlem At Your Beck And Call Solitude The Gal From Joe's Riding On A Blue Note If Dream Come True