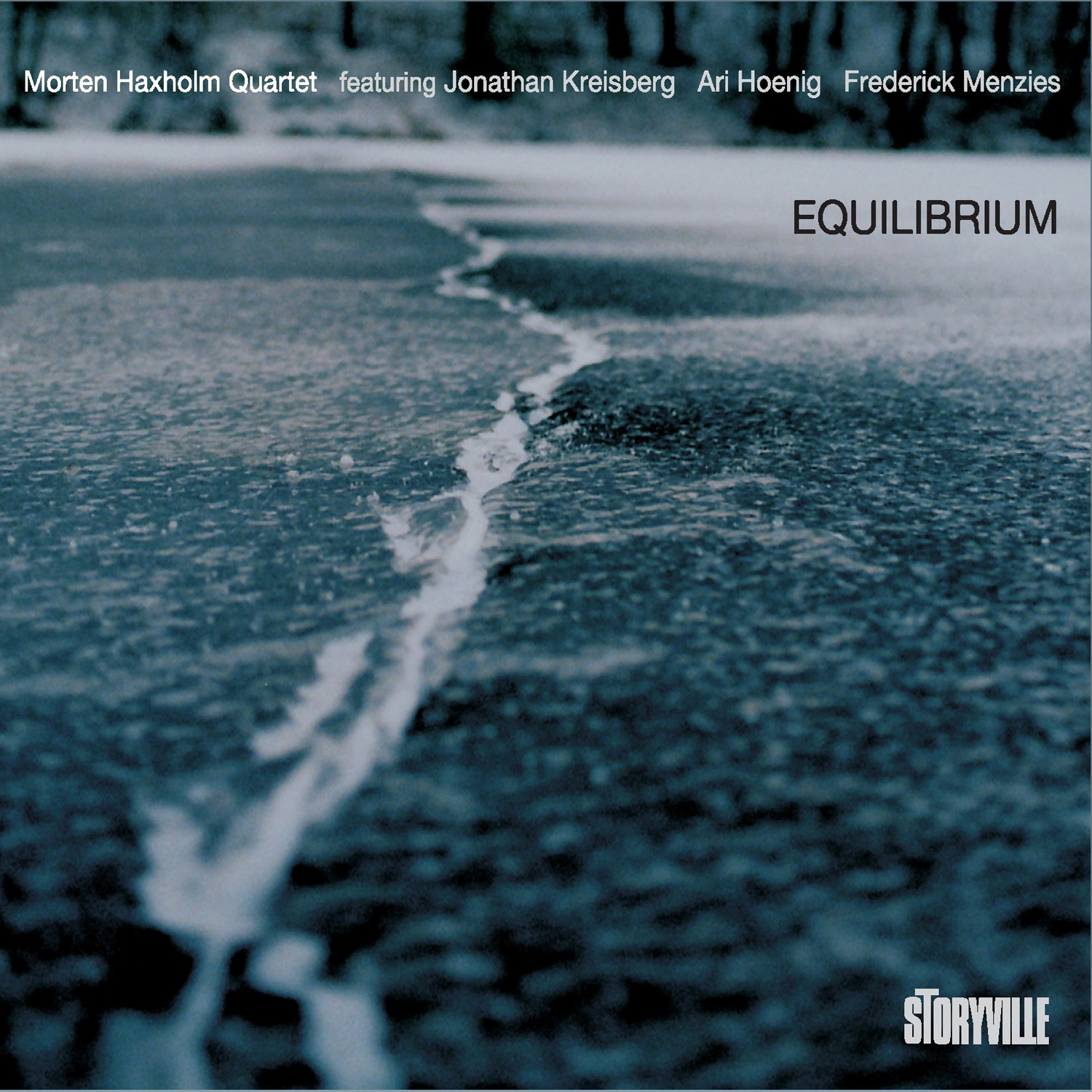 ’Equilibrium’ is the debut album of Danish bass player Morten Christian Haxholm. Currently residing in Copenhagen, Haxholm graduated with a master’s degree from the Carl Nielsen Academy in 2009 and now studies at the Rhythmic Music Conservatory in Copenhagen. Haxholm has played with many great musicians and singers from around the world and with him on his debut album are three great jazz musicians: Americans Jonathan Kreisberg on guitar and Ari Hoenig on drums as well as Frederick Menzies on saxophone. From New York City, Jonathan Kreisberg has played guitar and jazz from an early age, winning a scholarship at the University of Miami and going on to tour with renowned players such as Joe Henderson, Michael Brecker and Red Rodney. A highly accomplished drummer, Ari Hoenig has performed with people such as Jean-Michel Pilc, Kenny Werner and Herbie Hancock. Saxophonist Frederick Menzies is a resident of Copenhagen and was the winner of Young Jazz 2006. The album was recorded in 2012 in the famous ’Systems Two Studio’ in Brooklyn, New York and features compositions by Haxholm as well as the standards ’Night and Day’ by Cole Porter and ’Out of Nowhere’ by Johnny Green. The compositions are strong, well-written and refreshing with excellent playing by the young quartet, augmenting each other’s styles perfectly. The music ranges between easy listening and more daring compositions with rhythms of high complexity but it never fails to hit the spot.

Two of the greatest talents on the Danish jazz scene, crosses here sounding with two experienced jazz musicians from New York. It is bassist Morten Haxholm which is at the front of the Quartet. He has written all of the music. Haxholm has not made the big care of himself in public yet. In the last few years he has also been busy with the studies in the prestigious soloist line at the Rhythmic Music Conservatory in Copenhagen. Along with saxophonist Frederick Menzies, he has been in New York, where he, along with Ari Hoenig on drums and the incomparable guitarist Jonathan Kreisberg has recorded a strong debut album.  This is jazz that makes demands on the individual musician. Haxholm has not taken the easy things. He has made a number of compositions that do not please the  musicians but forcing them to play their best. In notes he writes to the plate number Cruithne, that in B-piece alternates between 7/4 and 5/4 and adds that he loves the uneven bars. For the jazz listener that does not count anything, when your ears are open, only one interesting by-product. It works incredibly well. The inter-action in the Quartet is sovereign. Menzies is a saxophone player, we certainly will hear much more in the future. He has no problems with playing up to Kreisberg's-driven guitar playing. It is, however, Morten Haxholm, that is star on the album. Several of the compositions -for example. Giacometti and Ezra- are simply very strong and interesting. Haxholm’s playing is authoritative, he controls the beat. It is an impressive debut album. He starts out with jazz, that smells of New York-not only in style but also in the talent and charisma

Bassist Morten Haxhold leads a team that spotlights guitarist Jonathan Kriesberg as well as bandmates Frederick Menzis/ts and Ari Hoenig/dr on this collection of post bop originals and treatments of standards.  Menzis’ tenor is firm and confident on the lovely rendition of “Out of Nowhere” and the trickily metric “Giacometti” which has the band setting up an obstacle course for which the sax and guitar jump  leap and veer around. A few of the tunes are trio works, and actually serve as a highlight, with Kreisberg’s suave lines working well on a rocking “Night and Day” as well as a ruminating “Unseen.” A nice mix of relaxed spaciousness and assertive energy.

The Danish bassist lines up a group of New York jazzers,, including Jonathan Kreisberg and Ari Hoenig, and offers up a tasteful combination of guile anbd swing.

Equilibrium is an impressive debut album you won’t want to miss. Danish bass player Morten Christian Haxholm is a Copenhagen-based artist who studies in the prestigious soloist line at the Rhythmic Music Conservatory in Copenhagen. His quartet, which pulls some of the best in New York jazz, performs a collection of post bop originals that are sure to whet your jazz listening appetite.  Lovely renditions of jazz standards ’Night and Day’ by Cole Porter and ’Out of Nowhere’ by Johnny Green sit among six original compositions by Haxholm. Haxholm’s compositional craft is stunning. He employs complex, interchanging odd meters to express beautiful melodies so sublime that the music develops into a coherence that eludes the listener’s recollection of its very complexity. It’s artistic genius, truly wonderful.  Praise for the ability to incorporate complexity into a masterful whole belongs as much to the composer as the rest of the quartet in performance. Rhythmic and melodic challenges are arranged and interpreted by Frederick Menzies (tenor saxophone) and Jonathan Kreisberg (guitar) in thematically brilliant - and at times pretty rocking - solo lines, while Ari Hoenig (drums) provides tasteful rhythmic spices without which the music would stand incomplete. It’s impossible for me to praise their collective musicianship enough!  To those who, like myself, love odd meters: get this album! It’s easily one of the best jazz albums I’ve heard all year.