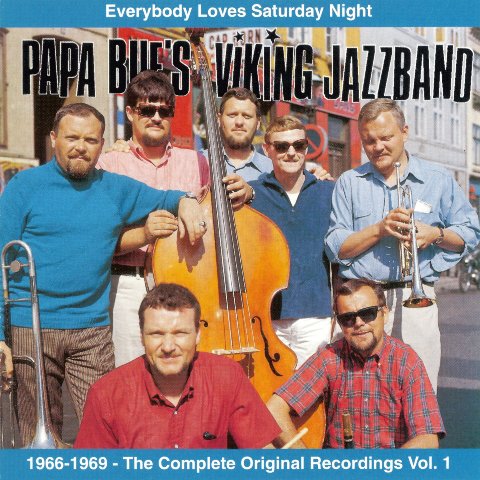 Papa Bue’s Viking Jazz Band is a well-known ”Institution” in the traditional jazz world inside and outside Europe. Arne “Papa” Bue Jensen formed his band in the summer of 1956 and soon found lots of fans in Denmark. But they became internationally known after their hit record Schlafe Mein Prinzchen, made in 1959. On this CD we hear 18 titles recorded between 1966 and 1969. The unique and vibrant style of the Papa Bue band is based on the New Orleans tradition with strong influences from early Duke Ellington, Fats Waller, and not least from Louis Armstrong. All takes are from the original Storyville recordings – accept no substitute!

Jungle Jamboree The Mooche Home (When Shadows Fall) Everybody Loves Saturday Night Stevedore Stomp Blueberry Hill Nobody's Fault But Mine Thoroughly Modern Millie Sweet Lorraine Taploka Tar Paper Stomp Quiet Days You Rascal You Mame She Had To Go And Lose It At The Astor I'm Shy, Mary-Ellen, I'm Shy Bye And Bye When The Saints Go Marching In