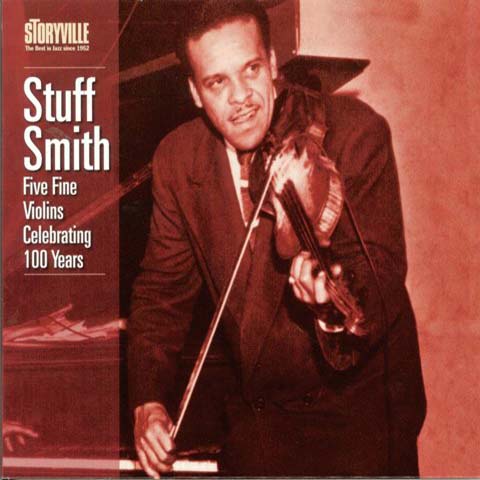 FIVE FINE VIOLINS Of the five Radio sessions represented on this release, four of them contain Stuff Smith teaming up with fellow violinists Ray Nance and Danes Svend Asmussen, Søren Christensen and Poul Olsen, three of these have never been released before. On April 4, 1965 Stuff Smith participated in a radio jubilee concert. Only recently has a mislabeled, long thought lost tape been recovered from the Timme Rosenkrantz archive. The astute listener will question the absence of drummer Alex Riel. There was confusion about the start time of Smith’s set following an interval and Riel failed to appear. Thus, we have a rare glimpse of a late Smith trio with just piano and bass. Riel, as good a drummer as he is, is really not missed. And that’s Stuff tapping on the violin ?. In an act of generosity, Smith introduces "Timme’s Blues" as written by his friend and manager Timme Rosenkrantz. It was, of course, written by Stuff Smith and it had a previous life in the USA under the title "Play:.