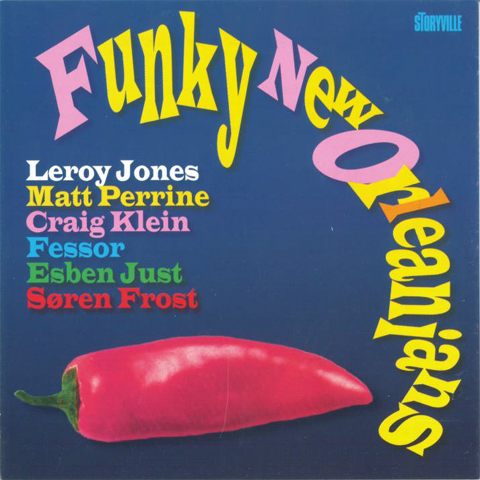 This CD, recorded in New Orleans in 1999, is the result of a collaboration between three Danes and three New Orleanians, led by the hip granddaddy of Danish New Orleans jazz – Ole “Fessor” Lindgreen. While this is totally authentic New Orleans music, it is anything but “trad jazz”. Rather, the music here is inspired by the more contemporary, funky New Orleans jazz-style. This is a nicely rounded set of New Orleans classics, one gospel number, a few jazz standards and three fine Fessor originals. Basically, if you’re into modern New Orleans rhythm & blues or jazz – or simply dig swinging, funky music – this album is for you! Each tune features tasty solos and seamless ensemble-playing – tunes that you’ll catch yourself whistling as you walk down the street. The three Danes on this session play like New Orleans natives. Søren Frost’s authentic shuffle beat and second-line drumming make you dance straight out of your seat. As for the New Orleans musicians, who can resist Matt Perrine’s sousaphone bass-line or Leroy Jones’ world-renowned, masterful trumpet playing?!