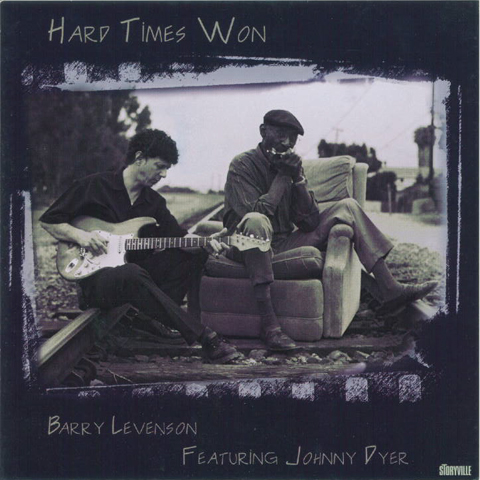 This CD was recorded in 2002 and combines hard-hitting Chicago blues with a more subtle, jazzy west-coast style blues. On this CD, homage is paid to leading bluesmen like T-Bone Walker, Buddy Guy, B.B. King, Muddy Waters and Howlin’ Wolf, plus jazz guitar giants Kenny Burrell and Grant Green – all of whom have influenced Barry Levenson. All the tunes are Levenson originals, and the style varies from tunes like ”Hard Times Won” with a Howlin’ Wolf groove and Bob Dylan-like lyrics, to tender love songs like ”She’s So Fine”, ”Inhumanity Blues” which reflects upon the Sept. 11th attack on the U.S., and the jazz/R&B-inspired number ”Slip Me Some Green, Jack”, a tribute to jazz guitarist Grant Green and organist Jack McDuff. Besides playing guitar throughout and writing all the material, Levenson produced this CD as well.Barry Levenson is in the vanguard of 21st Century bluesmen, fully in possession of the four ”T’s”: tone, technique, taste and toughness – plus an overwhelming respect for the blues. Harmonica-player and singer Johnny Dyer is a hard-edged Chicago-style bluesman who grew up in Mississippi. This is pure, heartfelt blues, with no frills, in an intense, intelligent, original style - in the classic blues tradition.

Hard Times Won Chasing The Money Things You Do Inhumanity Blues She's So Fine I Ain't Going Back The Graveyard Shift 9 O'Clock Blues Blues For Never Slim Drinking Stops Me Thinking Slip Me Some Green, Jack