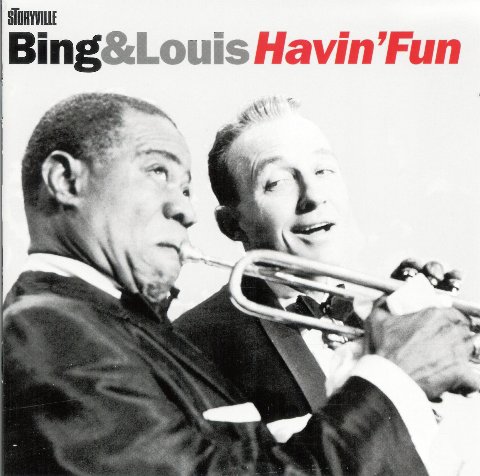 This 2CD set, comprising the albums Havin’ Fun and Havin’ More Fun, captures Bing Crosby and Louis Armstrong highlights from 1949 – 1951 editions of The Bing Crosby Show. The show ran – under changing sponsorships - through most of the 1950s and had a guest roster that read like a who’s who of mainstream entertainers. Bing’s most frequent guest was Louis Armstrong. The mutual respect and love that Satch and Bing had for each other is obvious on these recordings, the writing is inspired and Armstrong is extremely funny, often causing Crosby to crack up. Other featured guests on these sessions include trombonist Jack Teagarden, violinist Joe Venuti and singers Ella Fitzgerald, Peggy Lee and Dinah Shore. Some of the most memorable highlights include Bing and Satch’s collaborations on A Kiss to Build A Dream On, Gone Fishin’ and Lazy Bones. Louis had profoundly influenced Crosby since 1926 when he first heard him perform in person during a Chicago visit. The young singer was struck by the ease with which Armstrong seamlessly combined comedy with extraordinary musicianship – that ability gave Crosby direction for his own career and he followed it successfully for the next fifty years. That combination of crooning and comedy permeates this 2CD set which is brimming with good music and fun.