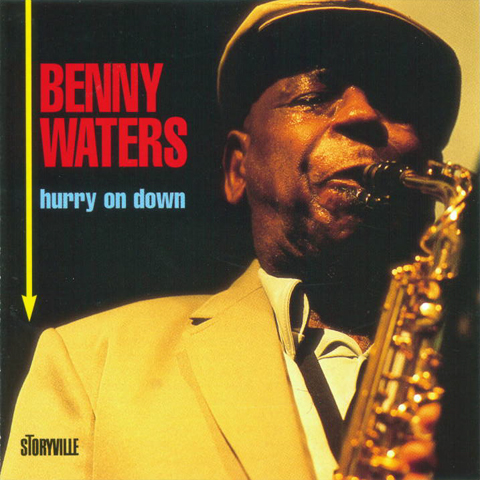 Although he has been professionally active for the better part of eighty years and is almost as old as the century, Benny Waters has largely escaped the attentions of musicologists and jazz theorists. Perhaps this indifference arises from his steady consistency, his unflappable ability to fit into a great variety of musical surroundings and his lack of eccentric behaviour patterns. Sadly for the jazz romantics, Benny neither died young nor ruined his talent with excessive self-indulgence. More relevantly, Benny has never allowed himself to believe that his development as a soloist is complete or attempted to coast along on reputation alone. This album will prove a revelation to those who only know of Benny Waters as a footnote in the jazz history books. They will hear a jazz musician whose creative excursions are always inspired, energetic and entertainingly direct. And one who swings magnificently, too. The album's opener, and title track, Hurry On Down (popularised by Nellie Lutcher) spots Benny's knowingly cheeky vocal before featuring some hot alto and a fluent Sealey chorus. The eight-minute version of Lazy River proves to be a marvellous showcase for Benny's clarinet, limpid at slow tempo, hard-edged and passionate in the quicker passages. There's more good alto. As usual, Edgar Battle's Topsy is a swinger, taken here on tenor. Blue Moon is played at a bounce tempo and comes off well. Sunny Side recalls the Hodges alto style and As Time Goes By is slow tenor balladry at its best. See the Light fairly motors along and Lady Be Good is jump tenor, again with a vocal (dig the lyrics!) while Autumn Leaves is taken as a bossa nova, with tenor and alto both featured. Have You Met Miss Jones is relaxed, the tenor warm and luxuriant, before the closer, an understated impromptu blues, breathy tenor to the fore, rounds out a fine set of performances.

Hurry On Down Up A Lazy River Topsy Blue Moon On The Sunny Side Of The Street I'm Beginning To See The Light As Time Goes By Lady Be Good Autumn Leaves It Had To Be You Have You Met Miss Jones? Fuzzy Blues