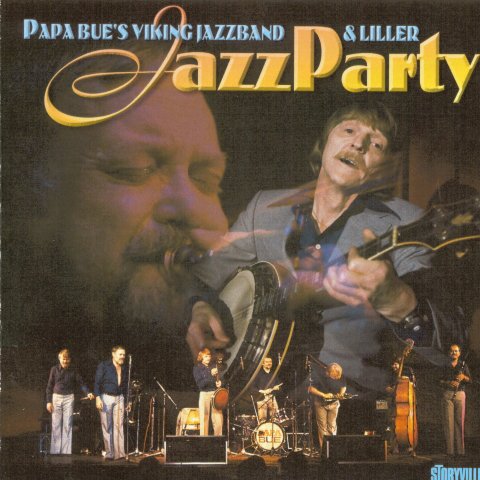 There once was a time when James Last was the ”party king”, playing sold-out houses around the world and selling millions of records. In Denmark, Johnny Reimar was James Last’s counterpart, travelling all over the country with his party shows. Thus, it was natural that Danish jazz should get on the party-bandwagon, and in 1977 the LP ”Jazz Party”, with Papa Bue and His Viking Jazzband, was released. It turned out to be a great recording with a festive audience, Gustav Winkler as master of ceremonies, and contained 28 numbers-traditional jazz standards, Danish melodies and one composition by Papa Bue’s pianist, Jørn Jensen, who was also arranger on the session. Papa Bue’s Vikings, in absolutely top-form for the occasion, consisted of Arne ”Papa Bue” Jensen on trombone, Ole Stolle on trumpet, Jørgen Svare on clarinet, Jørn ”Jønne” Jensen on piano, Bjarne ”Liller” Petersen on banjo and vocal, Jens Sølund on bass and Knud Ryskov, drums. Papa Bue’s Viking Jazzband has been in existence for about forty-five years, with Papa Bue, himself, the only ”survivor” from the original band. It’s good that he’s still on the scene. During all these years he has made many world tours, playing in about sixty countries. His record production is also huge. It’s impossible to emphasize just one record above all the rest. If one could, perhaps it would be the CD with all his big single hits from 1958 to 1969: STCD 5533. Every year, Papa Bue still gives his traditional concert in Tivoli’s Concert Hall - a tradition which fills the hall every time. Faithful fans meet up year after year. Many have been fans since the beginning, and look forward to him singing ”Corrine, Corrina” one more time. Papa Bue’s ”Jazz Party” is on the streets again, and is absolutely essential for parties at home, in the garden or on the terrace!

Nyboder's Pris Når Du Smiler Man Kan Vel Ikke Gøre For At Man Har Charme My Bucket's Got A Hole In It Loveless Love Do You Know What It Means To Miss New Orleans Bill Bailey, Won't You Please Come Home Down By the Riverside Eh la Bas Everybody Loves My Baby Farfars Blues Frankie And Johnny When it's Sleepy time Down South Ice Cream Tiger Rag Just A Closer Walk With Thee The World Is Waiting For The Sunrise High Society Everybody Loves Saturday Night Ja'Da Si Tu Vois Ma Mere Sidder På Et Værtshus Yes Sir, That's My Baby The Sheik Of Araby Olsen Banden Tin Roof Blues Saint Louis Blues Basin Street Blues Gloryland We Shall Walk Through The Streets Of The City Lord You've Sure Been Good to Me When The Saints Praise Of Nyboder