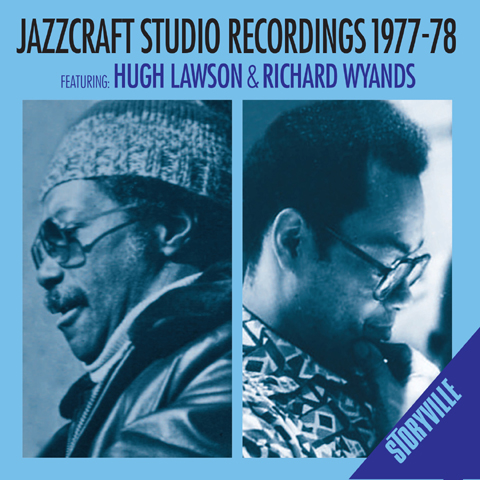 “Better last than never” is the way of introducing the veteran pianist Richard Wyands in his first effort as a leader. Richard chose two very compatible sidemen for his first outing. Lisle Atkinson was in 1978 becoming one of the most sought-after bassists on the New York scene. David Lee is probably best known for his previous stints with Dizzy Gillespie and Sonny Rollins. Richard Wyands influences are Herbie Hancock, Ahmad Jamal and McCoy but he is still very much his own man. Hugh Lawson is another underrated pianist. Hugh Lawson was born in Detroit. He is one of a long line of Detroit pianists like Hank Jones, Barry Harris and Tommy Flanagan. Hugh Lawson’s roots of his style seem to lie within the music of Bud Powell and Art Tatum. This is his first opportunity to record as a leader. Bob Cranshaw is like a “household word” among the many excellent  bassists who works in New York. Ben Riley was part of a rhythm section backing the two-tenor of Eddie “Lockjaw” Davis and Johnny Griffin.

Here is a fantastic 2 cd set of a pair of blue collar pianists who worked day in and day out as reliable sidemen, just doing their job of accompanying some leader and providing reliably creative music. Never in the spotlight, neither recorded very much on their own, making this reissue of trio dates even that more endearing and valuable.

Hugh Lawson made his living under the leadership of bands by Yusef Lateef, Charles Mingus and various Mingus alumni. On this ’77  session, he meets up with Bob Cranshaw/b  (most known with his work with Rollins) and Ben Riley/dr (ditto Monk). His heart is in the Bud Powell-inspired bebop, but with the added years has included more of a hard bop edge. This collection of originals and jazz tunes includes the intriguing Clifford Jordan piece “The Highest Mountain” as well as Mngus’ thoughtful and searching “The Duke Ellington Sound of Love” . The trio gels like old friends, with Riley’s drums snapping like baseball cards on wheel sprockets. Lawson’s hands are deft, confident and always swinging. You’ll want to put this next to your Hank Jones collection!

Richard Wyand has been hired by everyone from Ella to Hubbard, but spent the biggest chunk of his time with Kenny Burrell. Here, he’s given the leadership of a band consisting of David Lee/dr and Lisle Atkinson/b through a well mixed collection of self penned tunes and jazz delectibles. His own “Yes it Is” and “Leonora” have a nice earthy swing to them, while his glassy touch delves deep into the cracks of JJ Johnson’s “Lament.” He seems to delight most in lyrical pieces and coaxes lovely notes out of “Never Let Me Go” and Duke Ellington’s “Leonora,” while his “Yesterdays” has some haunting chord work. Nothing earth shattering here or world shifting-just great and timeless music that you’ll want to listen to over and over after being thunderstruck by all of the cacophonic posers out there these days