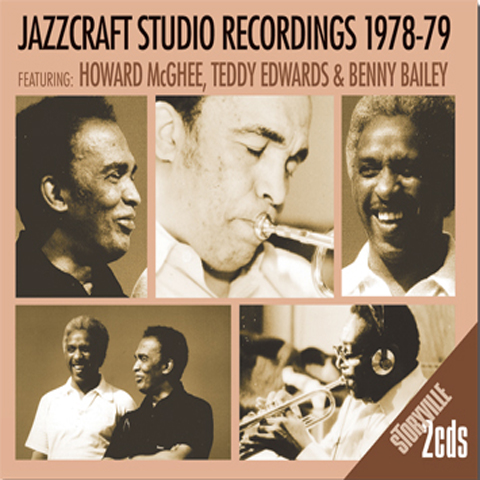 Jazzcraft is a new addition to the Storyville family of labels. It was founded by Lars Johansen, who went to New York and Los Angeles in 1977, 1978, and 1979 for the purpose of recording some of the key players of post-war jazz. In various combinations, they perform music that is a staple in the Bop repertoire: compositions by Charlie Parker, Thelonious Monk, Tadd Dameron, Oscar Pettiford, Fats Navarro, and Bud Powell, right up to John Coltrane. The initial release of three double albums features performances by stellar groups under the leadership of such mainstays of modern post-war jazz as Howard McGhee, Teddy Edwards, and Benny Bailey. The “sidemen” are also of up-front caliber, including Barry Harris, Sonny Redd, and Art Hillery—all stunningly propelled by the likes of Leroy Vinegar, Lisle Atkinson, Billy Higgins, and Bobby Durham.

“Largely forgotten today, Howard McGhee (who died 25 years ago this month at age 69) was a pioneering bebop trumpeter in the '40s, a member of Coleman Hawkins’ seminal bop band as well as a recording partner of Charlie Parker in Los Angeles. In those years he was often compared to Dizzy Gillespie as another fleet, soaring trumpeter, but one with a less abstract, more melodic style. When these recordings were made, McGhee, already in his 60s and buffeted by health problems, was a more introverted, reflective player with slightly blurry intonation, rarely rising above his mid-register. But, as these sessions prove, he was also a font of musical ideas, capable of producing sturdy, lyrically flowing, logically intriguing solos. Made at the end of the '70s, just on the cusp of the neo-bop revival – before Wynton Marsalis mania - the music here comes from two Jazzcraft CD5: Wise in Time by the Howard McGhee/ Teddy Edwards Quintet and Home Run from the Howard McGhee/ Benny Bailey Sextet, the latter including outtakes from the quintet session to round out the CD. The Quintet repertoire is almost all from the early bebop era, plus a Clifford Brown bop tune as well as ‘I Remember Clifford’ and, the one anomaly, John Coltrane’s modal ‘Crescent’. The mood verges on elegiac, with ballads and midtempos dominating. It's a mature bebop album by veterans fondly remembering, but not necessarily trying to emulate, the heady, breakneck excitement of those earlier times. What they bring is the wisdom of elders leavened with affection for the music of their youth. Edwards, whose tenor’s vocal timbre harks back to the Swing Era, quotes a Kansas City staple of the that time, ‘I Want a Little Girl’, on Billy Eckstine’s ‘I Want to Talk About You’. Other bop ballads include Tadd Dameron’s ‘If You Could See Me Now’, showcasing McGhee’s lyricism, a valid alternative to Miles Davis’ modern ballad approach; Bud Powell's Time Waits’ and a sumptuous version of Monk's Ruby My Dear’. Monk's In Walked Bud’ and a trio of Charlie Parker pieces plus Oscar Pettiford’s ‘Blues in the Closet’ are done at fast but not blistering tempos, bringing out the songful intricacies of the tunes. Both McGhee and Edwards bring admirably personal voices to their playing, avoiding the facile technique and polished clichés endemic to so many of today's neo- and postbop players. Of the 12 tracks on the Home Run CD, only seven are by the McGhee/ Bailey Sextet, as one is a feature for hard-edged tenor saxist Sonny Redd and four are outtakes (three alternates) from the Edwards Quintet sessions. However, those seven tracks are winners, the presence of trumpeter Benny Bailey stirring McGhee’s competitive instincts, resulting in his best solos on the album. Right from the opening track, his own bluesy hardbop ‘Get It On’, McGhee plays faster, higher and with more crackling intensity than his mellower form with the Wise in Time quintet. Bailey, who forged most of his career in Europe, is a mercurial bopper who plays with bright bravura and a brilliant tone to match. On ‘Get It On’ he brings out a plunger for fours with McGhee and the trades, down from half-choruses to fours and twos, on ‘Brownie Speaks’ are a scintillating brass battle capped off by Bailey's exuberant slide whistle-effect ending. Other highlights include ‘Jonas’, McGhee’s ‘Love for Sale’ contrafact with the composer Harmon-muted, Bailey tight muted with plunger; ‘Funky Senor’, Bailey's nod to Horace Silver's ‘Senor Blues’, with more wah-wah trumpet and Fats Navarro’s ‘Nostalgia’, an ‘Out of Nowhere’ contrafact worth reviving.” George Kanzler, NYCJR