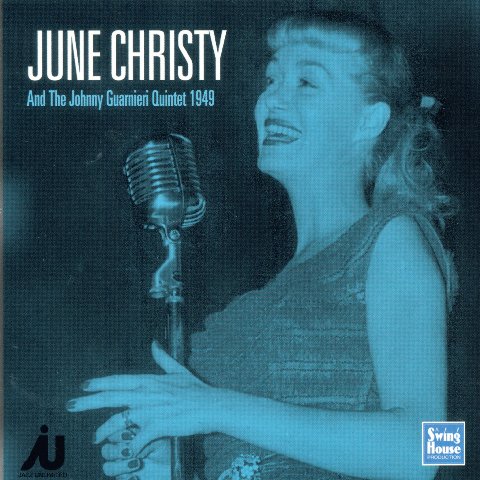 The 29 tunes on this CD (70 min. playing time) were recorded in Hollywood in 1949. The musical repertoire is mostly popular tunes of the 40’s – compositions by Irving Berlin, Rogers & Hart, the Gershwins, Count Basie and Kurt Weill, among others, plus three originals by Guarnieri. The musical style is mainstream swing jazz. June Christy had been vocalist with the Stan Kenton Orchestra (and would be again in the 50’s), when these recordings were made. Guarnieri first came to prominence with Artie Shaw in 1940, and had also played with Tommy Dorsey, Lester Young, Ben Webster and Louis Armstrong – among many others – in the 40’s, previous to making these recordings. June Christy was one of the greatest singers in swing jazz; she won the Downbeat poll four times in the late 40’s for best female vocalist with a big band. Her main influences being Sarah Vaughan, Dinah Washington and Anita O’Day (her predecessor in the Stan Kenton Orchestra), June Christy had a breathy, husky voice, which is used to wonderful effect on this CD. Johnny Guarnieri’s musical influence comes from Art Tatum and Willie ”The Lion” Smith, and helped make him a master of the ”stride” style of piano-playing.

Hello/September in the Rain I Can't Believe That You're in Love With Me Dancing on the Ceiling Get Happy Lucky in Love Bewitched, Bothered and Bewildered One O'Clock Jump Cheek to Cheek Lullaby in Rhythm S'posin' September Song Nice Work If You Can Get It Yesterdays They Didn't Believe Me I Didn't Know What Time It Was Robins and Roses Alice Blue Gown I'm Thrilled Why, Oh Why? Reckon I'm in Love Brother Leo How High the Moon There's a Small Hotel Zing Went the Strings of My Heart Too Marvelous for Words Idaho I'm Glad There Is You Cross Your Heart Between the Devil and the Deep Blue Sea/So Long