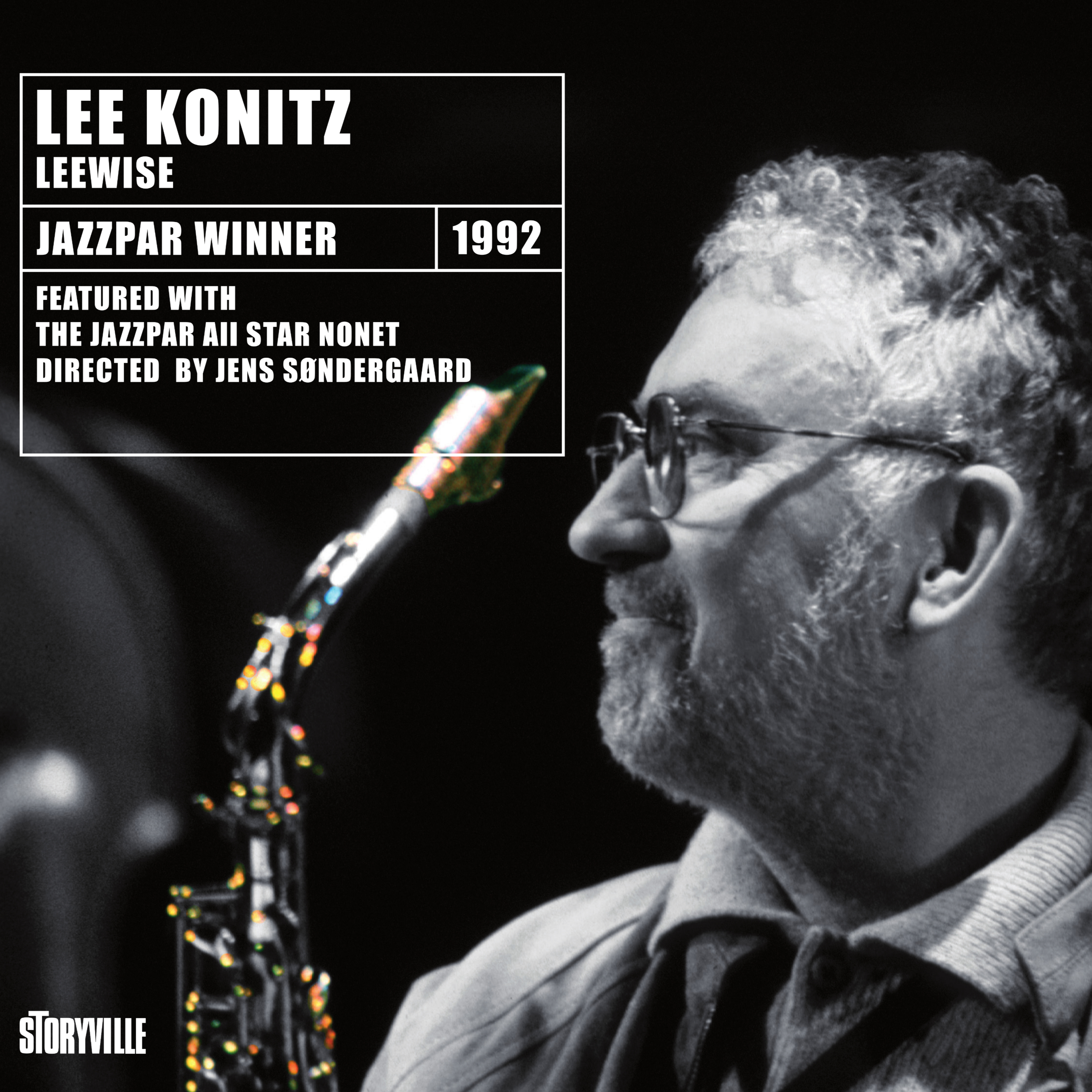 This release showcases the work of Konitz in a variety of settngs all derived from the JAZZPAR All Star Nonet directed by saxophonist Jens Søndergaard. It begins with three tracks recorded by Radio Denmark during the actual final concert of the series in Copenhagen’s Falkoner Scenen. Sadly, although this reissue has been in preparation for some months, it has now turned into a memorial for Konitz, who died at the age of 92 from complications of the virus Covid_19 on April 15, 2020. Lee Konitz was one of the most highly valued individualists of the entire field of jazz. His recordings from as early as 1947, the year he turned 20, show that the basis of his unique style was already formed, partly under the influence of fellow Chicagoan Lennie Tristano. This fact was remarkable enough, in an era when all the other saxophonists who weren’t actively clinging to the approach of Johnny Hodges, Willie Smith or Benny Carter were trying desperately to catch up with Charlie Parker. But Konitz was developing an almost pianistic process, in which his lines were not dictated by what was easy for his instrument and, in addition, were not given a deliberately emotive profile by the articulation and tonal variety of the saxophone.

Lee Konitz was a long-term fan of northern Europe, visiting and recording in Scandinavia from 1951 onwards, which lent a particular appropriateness to his selection for the JAZZPAR award. In the past he had collaborated with trumpeter Allan Botschinsky, who plays a prominent part in this session, and with the great Swedish baritonist Lars Gullin, whose son Peter is heard here during “Pazzenger”. In addition the saxophonist and leader of the JAZZPAR nonet, Jens Søndergaard, was a special advocate of Konitz and arranged touring and recording opportunities for Lee, to which the enclosed album represented an impressive culmination. Impressive not only for Lee’s own work, of course, but because the local musicians demonstrated that the JAZZPAR scheme was a showcase for them, as much as for the international stars involved.

Of the five performances with the full nonet, only “Stardust” was not deliberately created for the occasion (it was arranged by Sy Johnson for Konitz’s mid-1970s group). Of the works commissioned to reflect Lee’s Danish collaboration, “Partout” by Ole Kock Hansen (leader of the Danish Radio Big Band) and particularly “Leewise” by saxophonist Fredrik Lundin each have distant echoes of the Birth Of The Cool band, which in the late 1940s had placed an early spotlight on Lee’s individuality. “Skygger” is a special case, featuring a spoken and sung rendition by Birgitte Frieboe of poet Peter Poulsen’s tribute to Konitz, on which Lee responds typically in a setting by Copenhagen-based American pianist Butch Lacy. The previously mentioned “Pazzenger” is by fellow American Peggy Stern, Lee’s regular accompanist between 1992 and 1995, who also plays on three other tracks including a quintet performance of Konitz’s first recorded composition “SubconsciousLee”, arranged and reharmonized by Peggy.

The album also contains six duo performances, not only the two with Stern (including that tightrope act on “Body and Soul”). It is not only a confirmation of Lee’s commitment to improvisation, but also evidence that his Danish partners, Søndergaard, Botschinsky and Jesper Lundgaard, are as capable of maturely musical contributions and responses as any of Konitz’s previous illustrious collaborators. The history of the JAZZPAR AWARDS constitutes, in retrospect, a significant development in the recognition of jazz by international arbiters of taste, and by distributors of monetary recognition. Set up by the Danish Jazz Center and sponsored by Skandinavisk Tobakskompagni, it was the first award in the jazz field to offer an international nominee not only the exposure of a concert series, but the donation of a statuette and a significant cash prize (amounting to 200,000 Danish kroner). Between 1990 and 2004, theaward was made to several American performers but also, reflecting the history of the music itself, to six Europeans (Tony Coe, Django Bates, Martial Solal, Marilyn Mazur, Enrico Rava and Aldo Romano).