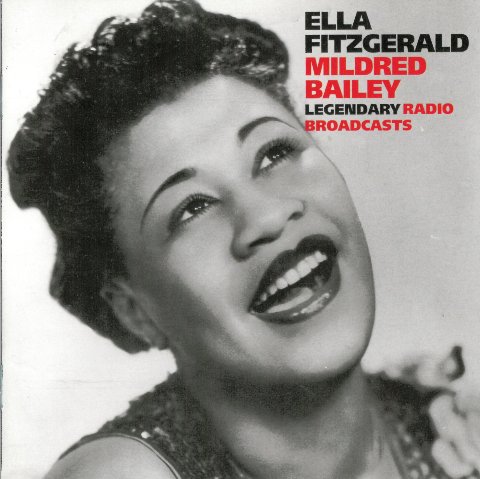 LEGENDARY RADIO BROADCASTS: 2 CD This is the second volume in our new series of famous radio broadcasts – more ?ne artists to follow a.o.: Ella Fitzgerald, Mildred Bailey, Fats Waller, Cab Calloway etc. It was in the 30ies and 40ieswhen the radio was the most important media before television took over. There were many different radio broadcasts all over USA. Live programs from different concerts and studio recordings. Count Basie had nightly broadcasts from Reno Club in Kansas City. When John Hammond heard a broadcast he went to Kansas City to hear the band in person. He then decided to bring it to New York City where they opened at the Roseland. To be regular featured on the radio was the best promotion an artist could get. Storyville has found many ?ne radio programs with various artists that will be released in the Legendary Radio Broadcasts series. ELLA FITZGERALD Ella Fitzgerald was 21 when she became the leader of “the Chick Webb Orchestra” when Chick Webb died June 16, 1939. After a few months it became “Ella Fitzgerald and her Famous Orchestra”. The orchestra lasted until July 1941 when she went out as a single. There are two Radio Broadcasts on this CD recorded January 22 & 25, 1940 in New York City. The orchestra was a 14-man band with many good musicians like Taft Jordan, Sandy Williams, Hilton Jefferson and Ram Ramirez to mention a few. Ella is singing A-Tisket, A-Tasket, Tain’t What You Do, What’s The Matter With Me, I Want The Waiter, A Lover Is Blue, This Changing World, Oh, Johnny Oh!, Thank Your Stars, and Vagabond Dreams. Taft Jordan is vocalist on Confessin’ and the remaining titles are instrumentals. MILDRED BAILEY There are three Radio Broadcasts on the Mildred Bailey CD recorded January 5, 19 and 26, 1945 in CBS Studios, New York. Mildred Bailey was accompanied by the Paul Bacon Orchestra. Her radio series was a consistent platform for top jazz players. Charlie Shavers plays a fairly dazzling “Summertime” with the Paul Baron Orchestra and Trummy Young also steps out from the band for a guest feature: “Trummin’ On A Riff.” Tommy Dorsey “Smoke Gets In Your Eyes.” Earl Hines does his famous “Boogie Woogie On The St. Blues” and Cozy Cole spreads out on “Stompin’ At The Savoy.” Moreover , each show cleared generous space for the small house band of Teddy Wilson, Charlie Shavers, Red Norvo,Remo Palmieri, Albert Hall and Specs Powell.

Cab Calloway And His Orchestra

Hold On A-Tisket, A-Tasket It Had To Be You Traffic Jam Summertime A Lover Is Blue Sleighride In July Dodgin' The Dean The Sheik Of Araby Tain't What You Do Swing Low, Sweet Chariot Confessin' Enchantment Blue Lou I'm Getting Sentimental Over You What's The Matter With Me Smoke Gets In Your Eyes I Want The Waiter Which Of The Great 48 Let's Get Together Hold On A-Tisket, A-Tasket Hold On Limehouse Blues I'm Beginning To See The Light This Changing World Trummin' On A Riff Oh, Johnny, Oh! I Didn't Know About You Diga Diga Do Bugle Call Rag He's Funny That Way Take It From The Top Night Music Vagabond Dreams Rosetta Break 'Em Down St.Louis Blues Let's get Together I'm Gonna See My Baby Hold On Sometimes I Feel Like A Motherless Child At Home With A Gnome Stompin' At The Savoy Evalina Hold On