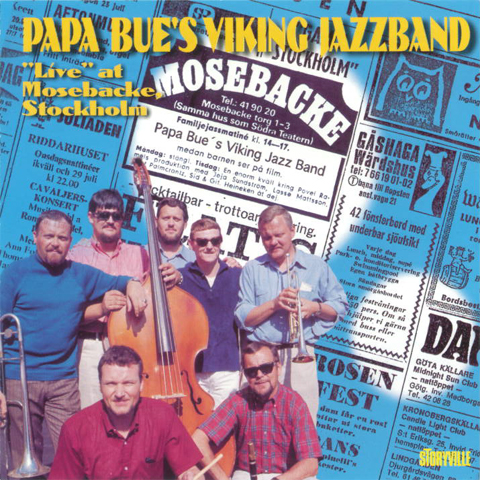 Yet another gem from the viking vaults. The Papa Bue Viking Jazz Band vaults, that is. In the summer of 1970 the band had a gig at the Swedish establishment, "Mosebacke", in Stockholm and the outcome is this. Exuberant and live. From 1956 up until 1980 the Bue band recorded for the "Storyville" label exclusively. The music was issued on EPs. LPs. and cassettes in those days. And now most of it happily is available on CDs. Not many "live" recordings were made, though. but this is one out of three. So, grab it while you can. It's the Viking Band at its peak with founder members Arne Bue Jensen (tb), Jorgen Svare (cl), and Bjarne "Liller" Petersen (bjo) playing for a very appreciative audience. This concert has never been issued before, thus giving you a rare chance to "get under the skin" of the Bue organisation. By the way: the other concerts will be available on "Storyville", too. What a treat! On this CD the vikings are playing a wide array of tunes from Scott Joplin to Duke Ellington from rags to riches'' A full set consisting of four of Eilington's beautiful compositions.. Creole Love Call, Stevedore Stomp, Misty Morning, and Doin' The Voom Voom all of them classics from Duke's "jungle period". Need we say that Papa Bue's Viking Jazz Band then and now is tops when it comes to swinging, laid back Jazz in the so called "traditional" style? Alongside Chris Barber's British jazzband certainly one of Europe's most popular bands over the years. Not only is it European. It's Danish at its best.