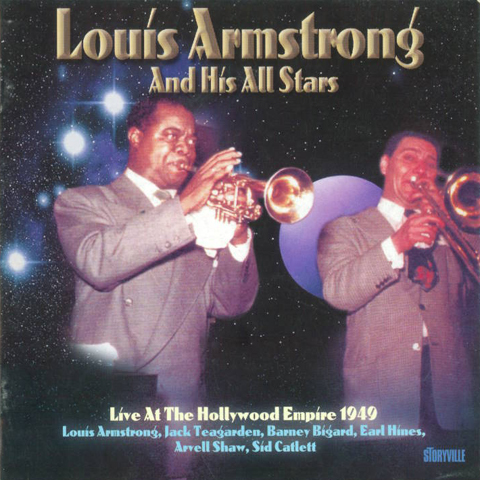 Live At The Hollywood Empire 1949

This CD has been compiled from a series of live broadcasts from the Hollywood Empire Room in Los Angeles in the Spring of 1949. In the course of 18 tunes and over 70 minutes, Louis Armstrong and his All Stars (a seven man band, including vocalist Velma Middleton) perform an inspired repertoire including trad jazz, Armstrong classics, swing, boogie woogie, popular music and show tunes. Louis Armstrong And His All Stars were on the road constantly in the years 1947 through 1951, crossing the U.S. ten times and travelling to Europe twice. Therefore, the All Star band truly comprised of star musicians was in great form and extremely popular when they rolled into Hollywood in March, 1949. In spite of playing night after night across the country, Louis and the band loved to please the audience every night. As is amply proven here, the Hollywood Empire Room concerts were no exception. While some of this material has been available before in various degrees of sound quality, this is the first time it has been gathered together in one package, and from the very best quality sound sources that exist.