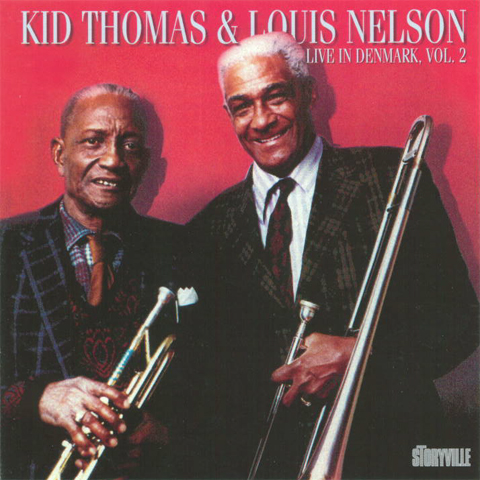 Following the discovery and subsequent recording of Bunk Johnson in the early 40s, attempts were made to seek out other long obscure local jazzmen and document their playing as well. Very few of these, however, have ever traveled much beyond southern Louisiana and even fewer had attained any recognition outside New Orleans. To the most dedicated of their fans and supporters, though, it never seemed to matter that many were past their prime. What mattered were their authenticity and their ability to evoke the sounds of a bygone era.

This CD being the second in a planned series of six (volume one is on STCD 6026) highlights the artistry of two such players, Kid Thomas and Louis Nelson. The band that accompanies Thomas and Nelson on these performances from the early 1970s does so with an understanding of the requirements of this form of jazz, which is no wonder when you consider that all of these men are deeply steeped in the New Orleans tradition.

Kid Thomas, Louis Nelson and others.

Panama Rag Tin Roof Blues Put On Your Old Grey Bonnet Some of these Days The Sheik of Araby Eh, La Bas! The Bells of St. Mary's Ti-Pi-Tin It's a Long Way To Tipperary Moonlight and Roses Release Me Just a Closer Walk With Thee Ice Cream