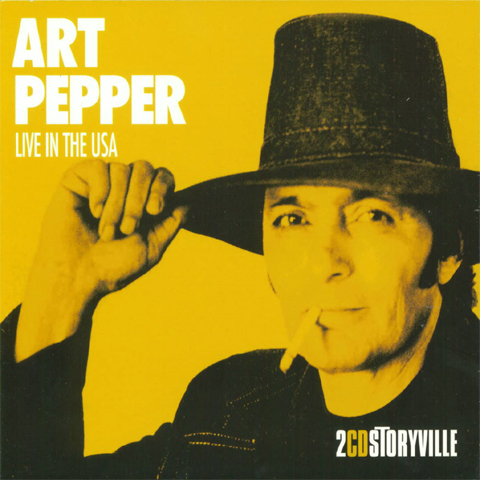 Live in the USA

ART PEPPER - LIVE IN USA Art Pepper was a teenager in the late 1940s, when he began his professional career with Gus Arnheim’s band, an esteemed relic from a bygone era. He also had another brush with the past, playing with Benny Carter, a man whose music remained forever fresh. With that background, young Pepper went out on his own, becoming a familiar face along Los Angeles’ bustling Central Avenue. There he played alongside some of the great up-and-coming post-war jazz men, musicians who, like himself, would become the new faces of jazz. When the military called upon Pepper to serve, he did so between stints with the blossoming Stan Kenton Orchestra, but the discipline learned from both those gigs went by the wayside as he got caught up in the chaotic swirl of hedonism, jazz and drugs that characterized and ruined the life of many musicians back then. The inherent criminality of that life eventually landed Pepper a series of prison terms, but he managed to get back on track and, with the help of Laurie, his extraordinary wife and biographer, resume his career. This set comprises two live California sessions produced by Laurie Pepper in 1975 and 1977, respectively. The music is an often deeply emotional, lingering reflection of an exceedingly hard life that was slowly receding. At this point, Pepper had spent three years in rehab at Synanon and firmly established himself as one of the most important alto player of the post-bop period. He is in fine form, surrounded by young players whose skills he respected.