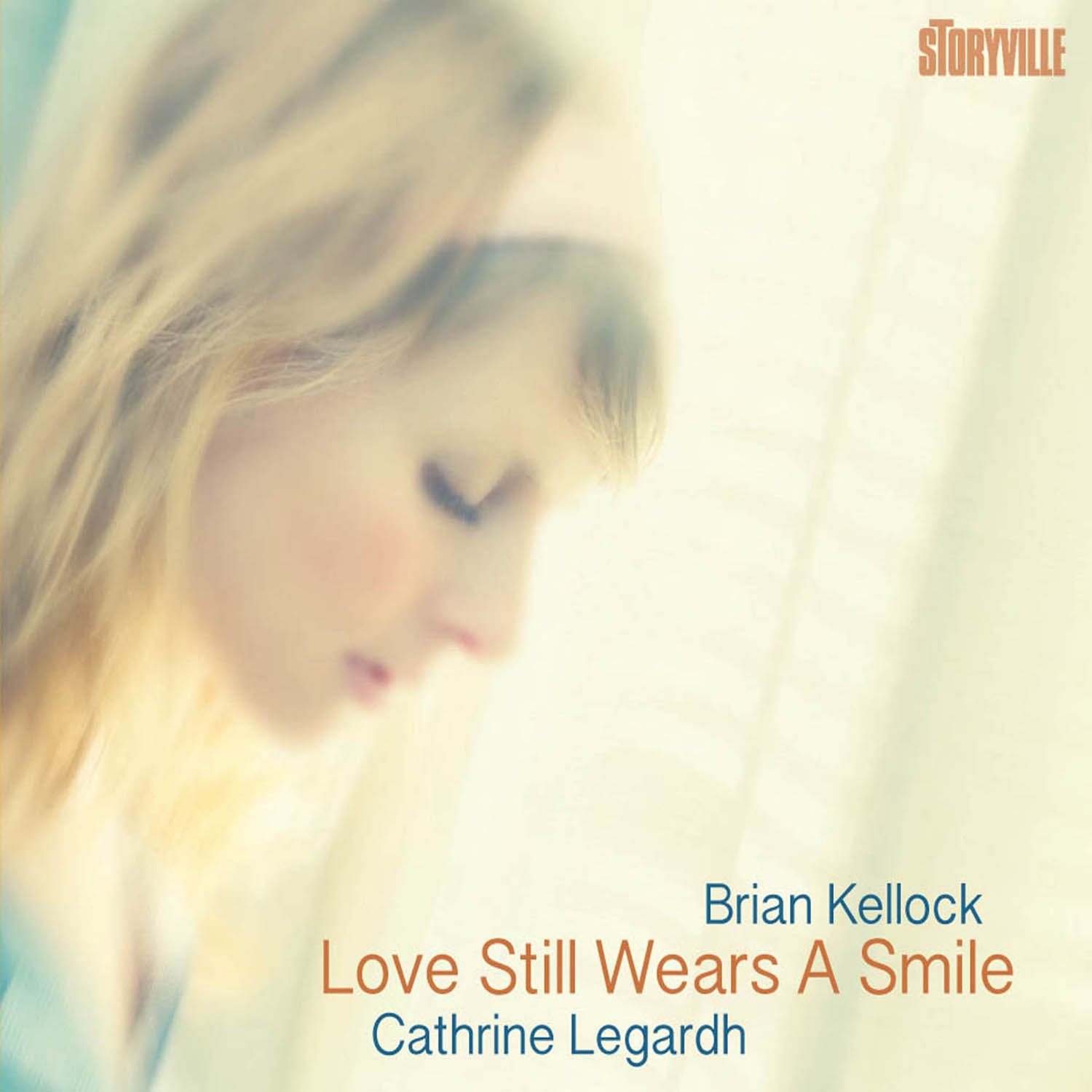 Jazz singer Cathrine Legardh and the Scottish pianist Brian Kellock are back together in a loving duet on the album 'Love Still Wears A Smile'. The CD is released on 4th April 2013 on Storyville Records, and this is the first time since the debut album 'Gorgeous Creature' (Storyville 2008) that Legardh and Kellock go into the studio together. The album marks ten years of friendship and musical collaboration and interprets exclusively jazz standards, including a handful of lesser known - or more neglected - particular of Henry Mancini and Kurt Weill.

'Brian Kellock, one of the Unsung heroes of Scottish jazz and one of the best jazz pianist in Europe plays with Danish singer Cathrine Legardh, hvis smoky sultry voice works perfectly with Kellock's mastery of the keys.' BBC NEWS | SCOTLAND
Cathrine Legardh, born 1973 (Denmark), jazz vocalist, previously released three critically acclaimed albums on Storyville Records, in addition to two CDs and a book for children called NullerNix. She sings standards, Nordic songs and her own compositions primarily in Danish, Swedish and English. In 2011 she was nominated for a Danish Music Awards and an Icelandic Music Awards for the album "Land & Sky, consisting of original compositions written in collaboration with the Icelandic saxophonist, Sigurdur Flosason.
Brian Kellock, born in 1962 (Scotland), one of Britain's finest pianists, graduated from Edinburgh University in 1986. Has toured all over the world, including working with Herb Geller, Sheila Jordan, Art Farmer, Red Rodney, Scott Hamilton, Stanley Turrentine and others. Has released a handful of albums with his own trio and in particular recorded for Warner Bros. Records. Did the BBC Jazz Awards in 2003 and 2004 and also won the title of 'Jazz Musician of the Year' in the UK in 2011.
Watch "A Time For Love":

Even though it is quite simple, you need some sort of extra energy to play duo. At least in the case where a pianist has make up for a whole rhythm section. After all, it is all about maintaining the listener’s attention.

But there are people who go at this without regrets. Among these are singer Cathrine Legardh, who has shown her calibre in different formats and languages. The Danish singer has allied herself with her frequent collaborator, the Scottish pianist Brian Kellock, and together they dive into the huge songbook of jazz. They avoid the most trite works and begin with Charlie Hadens beautiful ballad “First Song” - a charming ear-catcher.

The pianist is what you can call a pianolion, and can seem a bit too pushy on the more aggressive stuff, although Cathrine Legardh doesn’t get intimidated. But there is – as indicated - more balance in the universe of romance and melancholia, and here it is worth noting “Two For The Road”, “Lost In The Stars” and for the perfect ending: “The Party’s Over”.

A jazz singer and a jazz pianist revitalizes some of the established ballads.

Catherine Legard is a jazz singer who has "grown" over time. With her ​​vocals lacked the intensity and authenticity ten years ago, seems today to have found. Love Still Wears A Smile - Legards fourth album at the renowned Danish jazz label Storyville - is her best so far: a focused, complete and single album consisting of established ballads that beautifully redeemed in "interaction" with the talented British pianist Brian Kellock.

Love Still Wears A Smile, which is actually Legards and Kellocks joint album contains only songs with piano accompaniment, so it appears naked. But just that - combined with the resulting intensity and authenticity - makes the album works well. Legard delivers her songs with a warm glow and Kellock his piano playing sometimes with clout, sometimes with a fascinating detained stop.

This manages duo to revitalize numbers as Haden and Lincoln's First Song, Moross and Latouches Lazy Afternoon and Styne, Comden and Green's The Party's Over.

It's super simple and straightforward. A grand piano and a voice. It is the second time that the Danish singer Cathrine Legardh doing an album with the Scottish pianist Brian Kellock. This time they cut to the bone. They are the only instrumental. It leaves room for both of them and they take their places without problems. It is risky to make an album where the focus is constantly on the song and the piano. It is both quite cold face. They run anyway not the direct route. Brian Kellock pills for example. by Kurt Weill's Lost in the stars in a strange way. Legardh take up the challenge and make a version that can compare with Radka Toneffs and Steve Doborgosz 'magical version from the album Fairytales in 1982 - an album that otherwise has since achieved the status as one of the best Norwegian jazz albums ever.
Cathrine Legardh have what it takes to carry an entire album, which she is so much in focus. Her warmth and relevant voice gives a calmness and serenity which helps to keep the music floating all the way. The material is carefully selected. The album opens with Charlie Hadens First Song, who has been text of Abbey Lincoln. This is followed standards as Nobody else but me and Lazy Afternoon. We are also about Horace Silver's Peace and Henry Mancini's Two for the Road.
It is the Icelandic saxophonist Sigurdur Flosason - who starred at Legardhs previous album - which has produced the album. He has a fine sense of the pure and fragile in music. Love still wears a smile is not a smooth "background of red wine jazz" record, there contains too many knots. Legardh and Kellock has set the bar high. They make intelligent contemporary vocal jazz, standing on the shoulders of jazz history.
http://jazznyt.blogspot.dk/

Things are jazzed more with Hammerstein and Kern’s Nobody Else but Me and Close Your Eyes by Bernice Petkere, where she pulls around the phrases and swings with and sometimes against Brian’s fatter piano lines.  Born in Denmark to Danish/Norwegian/Swedish parents, Cathrine’s accent is quite strong when singing in English; she clips the close of her words with a short purr and never truly opens out - her lips I imagine to be pursed.  This style can be advantageous, particularly lending itself to the bebop scat lines she weaves through This is New by Weill/Gershwin.

I particularly enjoyed Two for the Road by Mancini/Bricusse; Cathrine has a continental air that I feel marries perfectly with this delicate harmonic progression. Together Brian and Cathrine explore many possibilities within their duo, both rhythmically and structurally; the more outlandish and contemporary numbers being Peace by Horace Silver encompassing lingering space, dynamic tensions, spoken word and the entirety of the keyboard.  Also the percussive, aggressively syncopated No Moon at All by Mann/Evans.

Although I admire risqué arrangements, I personally derived most pleasure from the simpler pieces within this album.  The calm resumes in the final number, The Party’s Over by Styne/Comden and Green, and I consider retiring to bed, when a secret track, starting with a poem halts me – a final solo of delicate cocktail piano by Scot, Brian, is the perfect night cap.

Here’s a gentle and penetrating collection of duets between vocalist Catherine Leghard and sublime pianist Brian Kellock. The songs are familiar to most of us, but the delivery is quite penetrating and personal. A wordless coo on “First Song” sets the mysterious mood here, while “Lazy Afternoon” settles like an evening haze. The pair get a bit eery on a haunting “No Moon At All” and a sensuous reading of Horace Silver’s “Peace” spotlights Legardh’s mix of fragility and elasticity. Impressionistic hues abound here.