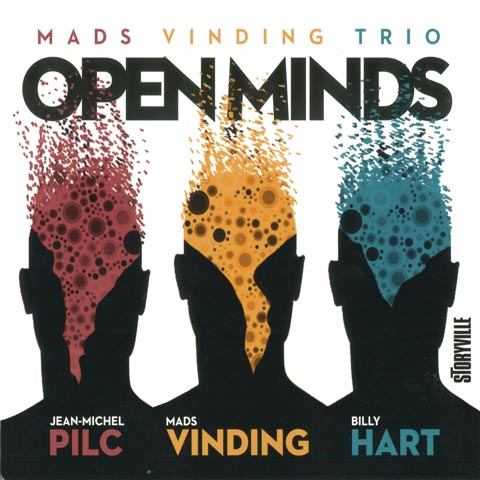 OPEN MINDS is the new CD with Mads Vinding’s Trio now released on Storyville. MADS VINDING is one of the many world famous Danish bass players. He has performed all over the world and recorded with an impressive list of jazzmasters. He has worked together with drummer Billy Hart for more than 35 years. BILLY HART is one of the most influential, melodic and creative drummers in jazz. He has recorded more than 600 hundred records with people like Miles Davis, Herbie Hancock and Wayne Shorter and has twice won the first place in Down Beat Critics Poll He is currently on the faculty of several major universities. JEAN-MICHEL PILC is French born but now an American Citizen living in New York since 1995. He has played with Richard Bona, Michael Brecker, Marcus Miller and Kenny Garrett and is pianist and musical leader for Harry Belafonte. He is self taught pianist but was a very big surprise for Mads Vinding that did not know him when Billy Hart suggested him as the pianist for this recording. It is a sensational trio CD.

One of Europe's best bassists, Mads Vinding has a CV as long as Shaq O’Neal’s arm. Here, he teams up with the up and coming Jean-Michel Pilc/ and the perennially reliable Billy Hart for a collection of elliptical and tangential treatments of standards, along with some harmonically sophisticated originals. Of the former, “Someday My Prince Will Come” and “How Deep is The Ocean” are portrayed with an askance glance giving here and there references to the melody, while skipping along to creative rhythms. Vinding’s bass work on Pilc’s “Sam” shows some rich sonorities, while his feverish fingering on “Summertime” goes through almost every season. His own title track has a dark and nocturnal mood, while he and Pilc get ruminating on “Golden Key.” As modern as the local art museum.” George W. Harris, Jazz Weekly