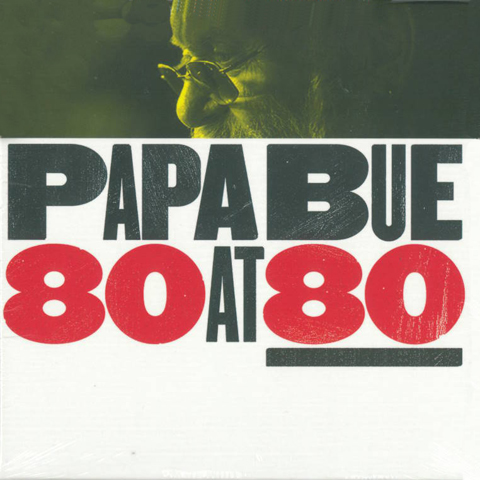 “Danish trombonist and bandleader Arne Bue Jensen was dubbed ”Papa Bue” early in his career and this four-disc set celebrates his 80th birthday. Sadly, he died a year later on Nov. 2nd, 2011. One hopes he was able to enjoy this tribute from the label that issued so much of his music. The four-disc set devoted to Papa Bue’s Viking Jazzband begins with two private recordings made in 1954 and concludes with 1977-78 studio dates. Although the personnel varies, the music is remarkably consistent yet the 80 tracks are not monotonous. This is the rare boxed set that one could listen to in long stretches. Bue is not well known as a jazz trombone virtuoso, but the deceptively simple style he affects changes nimbly with the context. He never gets in anyone’s way and his ensemble lines are modest yet highly effective; his subtly forceful playing reaches back to Big Jim Robinson and forward to Eddie Condon’s reliable Cutty Cutshall. But the star of this set is his band, swinging, energetic, but capable of sweet, soft jazz as well. Many well-known American and European trad, New Orleans, Chicago or even Dixieland ensembles in this period seem like crude copies of the original styles. The tempos are often rushed; the volume is high; the rhythm section overemphatic. But Bue’s band glides rather than pounces. The overall approach and sound encompasses the New Orleans dance-hall music of Bunk Johnson and his contemporaries, but moves forward for affectionate homages to the Eddie Condon school and ultimately versions of timeless ‘’mainstream” of which Stanley Dance would have approved. Although the repertoire is familiar, the treatments are occasionally more modern than one might expect - a lengthy bass solo here, the sound of an amplified string bass elsewhere, a two-chorus single-string guitar solo that owes little to Crescent City banjo playing. Ideologues might choose to see the band's progress and change as the dilution of a ‘pure’ style, but the music is beautifully played, swinging and it politely knocks down the synthetic walls called ‘styles’ that some find indispensable. Listeners will find many surprises in this set: one hardly expects a band with this apparent orientation to perform the early Ellington classics Misty Morning”, "Stevedore Stomp” and ”Doin’ The Voom Voom”. That a substantial number of tracks pay homage to Louis Armstrong is to be expected, but a version of ”Listen to the Mocking Bird” is not. There is also fine sweet singing of Genther Winckler, ”the Danish Bing Crosby” (more like Perry Como) who works well with his hot colleagues, especially on "I Wonder Who's Kissing Her Now”. Trumpeter Finn Otto Hansen, clarinetist Jorgen Svare, banjoist Bjarne ”Liller” Petersen, bassist Jens Solund and drummer Knud Ryskov Madsen are among the regular members of Bue’s band and they are fine soloists and generous ensemble players. Many jazz listeners confine themselves to the famous musicians they already know well; these recordings would impress for their musical value alone. And the sometimes-unfamiliar names should remind jazz listeners that wonderful music is being played globally by musicians who never win polls. The set is greatly enhanced by the liner notes of veteran jazz writer Chris Albertson, a Dane himself (known for his biography of Bessie Smith, liner notes, sessions he has produced and blog Stomp Off in C). His casual yet erudite essay makes good reading on its own. A tribute to the masterful and friendly playing of the Bue band can be found in the American visitors eager to work and record with it, each one impressive: clarinetist George Lewis, trumpeter/ singer Wingy Manone, blues singer Champion Jack Dupree, clarinetist Edmond Hall and pianist Art Hodes. The standout here is cornetist Wild Bill Davison (who lived for a time in Denmark) featured on 13 '70s tracks. Davison was always an energetic player, but one who tended to repeat his solos on familiar songs. With Bue, he swoops and dives, inventing new variations at every turn - a tribute to how the band inspired him. Although some listeners might not have heard of Bue and his colleagues, they will find this set a consistent pleasure.” Michael Steinman, NYCJR