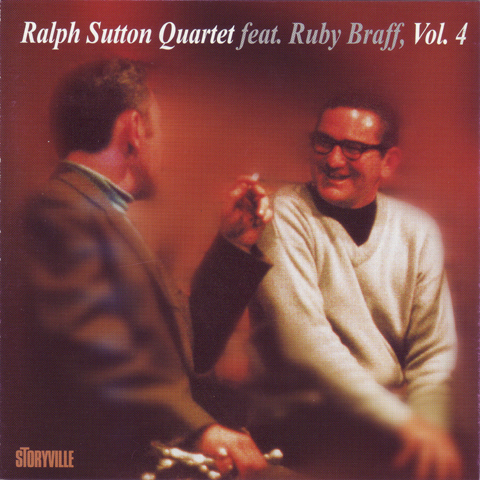 Intimate live 1968 recording from Sunnie’s Rendezvous, a famous little club in Aspen, Colorado. The repertoire consists of ten eternal jazz standards in the classic swing/mainstream genre, which was the preferred jazz-style of both Ralph Sutton and Ruby Braff. Sutton, whose biggest influence was Fats Waller, excels as a stride pianist. Ruby Braff, whose hero was Louis Armstrong, is truly a virtuoso swing trumpeter. There is a clear, close affinity between the two musicians. Bassist Milt Hinton and drummer Mousey Alexander are two tasteful top jazz artists whose style of playing fit Sutton and Braff like a glove. Music such as this is the very essence of jazz. Four master craftsmen who make it all sound so easy - pacing themselves well and capable of generating as mush drive and excitement as a big band. Milt Hinton, the bassist on this gig, was very enthusiastic about the music played that evening in 1968: “I think Ruby Braff was playing at his very best at that time, and Ralph is always 100%. This type of piano playing is an almost lost art. Ralph has no peer at it.”

I Surrender Dear Jeepers Creepers Just One Of Those Things I'm Crazy 'Bout My Baby Coquette Lady Be Good Cottage For Sale I Got Rhythm Dinah St. Louis Blues