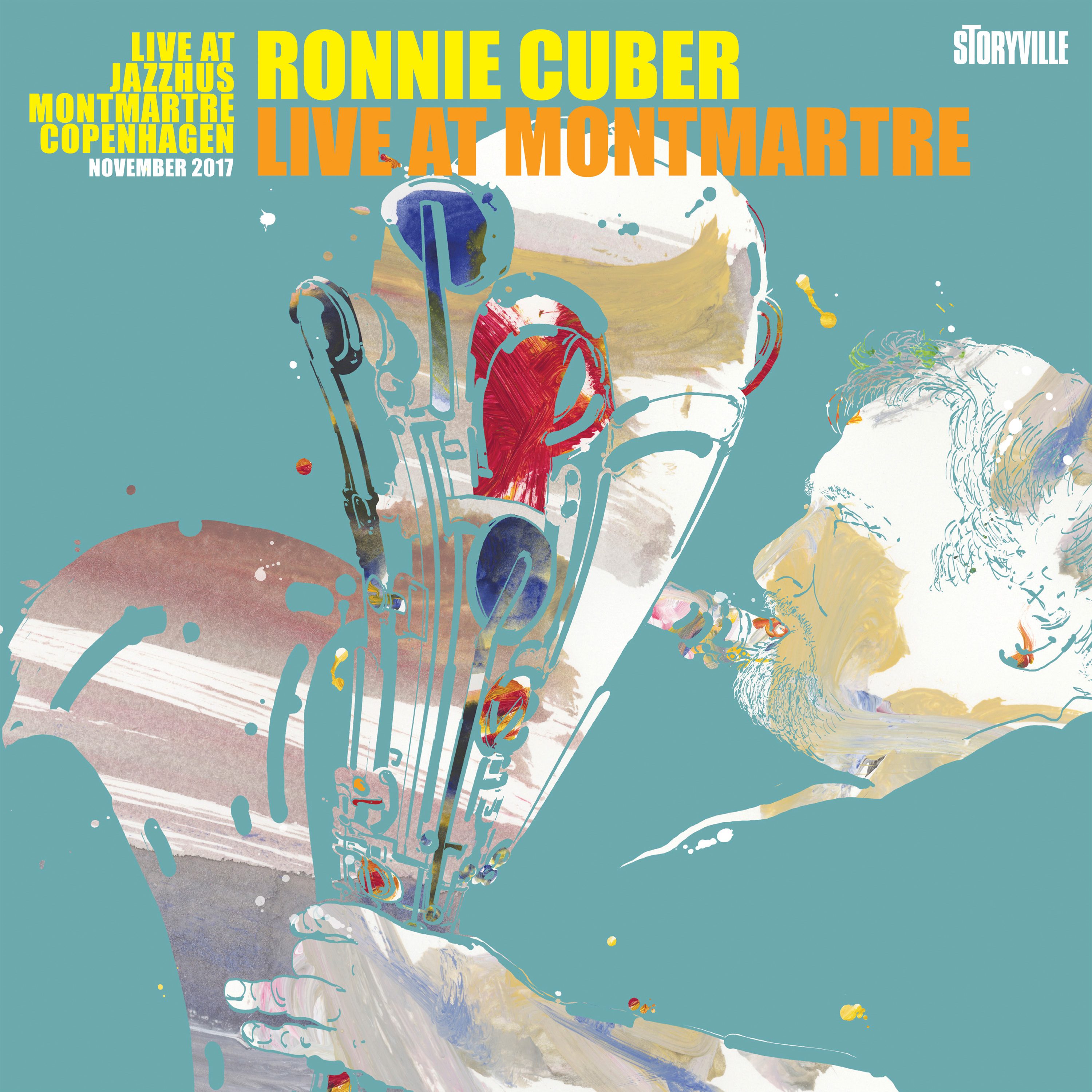 This recording marks the third time Ronnie Cuber has visited Jazzhus Montmarte in Copenhagen, the first time being in 2015 where he played a beautiful concert with Nikolaj Bentzon.
He recalls: ”I noticed Horace Parlan, one of my favorite pianists came in to dig the band. When we finished the set, I announced Horace was in the house and he gave me his famous ear to ear grin. He was living 75 kilometres away from the center of Copenhagen in 2016 and made the trip into the club again a year later. February 2017 he passed away in his beloved Denmark, a few months before my third time playing at Montmartre.”
3 concerts were held, all three of them being recorded by Storryville Records. The line-up consisted of Ronnie Cuber (bars), Kjeld Lauritsen (hamm org), Krister Jonsson (g) and Andreas Svendsen (dr).
Ronnie Cuber is a renowned Jazz Saxophonist, who has played with George Benson, SlideHampton and Maynard Ferguson and outside the jazz world such as Frank Zappa, B.B. King and Eric Clapton.
Cuber remains an active and creative force on the jazz scene to this day, as evidenced by this release, recorded in 2017.
His first recording as a band leader goes back to 1976 and he has been very active since then, both as a band leader and a side-man.
The set list at these shows was mix of well-known classics written both by Cuber as well as other musicians, and includes classics such as Au Privave (Charlie Parker) and Four (Miles Davis) as well as Cubers own tribute to Richard Tee, Tee’s Bag and organist Kjeld Lauritzens Jazz Girls.

Hard bopping baritone saxist Ronnie Cuber is in vintage form at Copenhagen’s Monmartre Jazzhus for a November 2017 gig with musical compatriots Kjeld Lauritson/B3, Krister Jonsson/g and Andreas Svendsen/dr. Cuber’s sax is rough and ready, bopping with delight as Svendson snaps and Jonsson swings on “Au Privave” and the sizzling “Four.” Cuber displays strong masseters on the classic “Cherokee” while Lauritsen cruises his B8 of a B3 in overdrive for a grooving 6/8 “Bluesette” and a bluesy “Jazz Girls.” The team is sleek on the melodic “Silver’s Serenade” and shuffles off to Buffalo on a gospel grooved “Tee’s Bag.” Meat and potatoes on a blue plate special!

Baritone saxophonist Ronnie Cuber cut his teeth in  Marshall Brown's Newport Youth Band in 1959. The band was noteworthy for breaking in gifted players who went on to sizable jazz careers, including bassist Eddie Gomez and pianist Mike Abene. The band also was a feeder for Maynard Ferguson's big bands in the late 1950s and early '60s. Among those who recorded on Ferguson's The New Sound of Maynard Ferguson (1963) and Come Blow Your Horn(1964) were Ronnie, Abene and Nat Pavone. [Photo above of Ronnie Cuber courtesy of Fresh Sound Records]

These days, Ronnie does a lot of touring in Europe, where jazz still thrives in clubs and concert halls. In November 2017, Ronnie was at Jazzhus Montmartre in Copenhagen, backed by Kjeld Lauritsen on organ, Krister Jonsson on guitar and Andreas Svendsen on drums. The run was recorded by Denmark's Storyville Records and recently released as Ronnie Cuber Live at Montmartre.

The album opens with Tee's Bag, Ronnie's tribute to pianist-arranger and studio musician Richard Tee. Toots Thielemans' Bluesette waltz follows with a bouncing solo by Ronnie. Next up are three songs made famous by Charlie Parker. Ronnie takes Cherokee at its typical burning-fuse tempo and the sidemen follow suit. Then comes Just Friends with highly charged solos by swinging guitarist Jonsson and organist Lauritsen before Ronnie cruises in with his grunting baritone. Au Privave is a straight-up reading beginning with Ronnie, who tears neatly through a bop solo. Jonsson and Lauritsen again light up the song with solos reminiscent of '60s organ-combo recordings on the Prestige  label.

Like some listeners still out there, I first heard baritone saxophonist Ronnie Cuber in the mid-sixties when he was the horn player in the George Benson quartet that recorded It’s Uptown and The George Benson Cookbook. (I had previously heard Benson in a stunning performance at Newport playing “C.C. Rider.”) Benson’s quartet wasn’t Cuber’s first gig, nor did it reap him his first reviews. In 1959, he played with Marshall Brown’s Youth Orchestra at Newport. Brown needed a baritone saxophonist. He bought Cuber an instrument and the 17 year old’s solos (he was born in 1941) were widely noted.

In 1966, though, he was a startling presence in George Benson’s second and third recordings as a leader. Cuber played with a barking tone, as rough and tough as sandpaper. Benson played slow blues (including his version of “C.C. Rider,” called “Benson’s Rider”), but he also took on rip-roaringly fast numbers, such as “Clockwise.” On his seemingly ungainly instrument, Cuber kept up and then some. He contributed exuberant solos, often emphasizing the lower range of the instrument. If there was a precedent to his kind of agile, but still gritty-sounding, baritone playing, it was Pepper Adams, who was playing hard bop at the time with Donald Byrd.

Cuber’s long career since has been as varied as can be. He recorded with the Saturday Night Live Band, and also with McCoy Tyner’s big band. He worked with the Mingus Big band, playing parts that Pepper Adams had first recorded with the bassist. I heard him with Lee Konitz’s marvelous Nonet. He’s specialized in performing Latin music: he’s on Eddie Palmieri’s The Sun of Latin Music. And he’s appeared on dozens of less jazzy recordings, with people like Paul Simon and Billy Joel.

The George Benson Quartet featured organ player Lonnie Smith as well as Cuber. Recorded in November 2017, Cuber’s Live at Montmartre session reproduces that instrumentation: it features Kjeld Lauritsen on Hammond organ, Krister Jonsson on guitar, and Andreas Svendsen on drums. Cuber serves up a grumbling solo, with an occasional wail, on the slow blues “Jazz Girls,” written by the organist. It’s among the highlights on a session that mostly consists of bop and hard bop numbers, such as Miles Davis’s “Four,” Horace Silver’s “Silver’s Serenade,” and Charlie Parker’s “Au Privave.”

The Danish band is as hip as need be: with his flair for octaves, guitarist Johnsson sounds more like Wes Montgomery than George Benson. Lauritsen pounces on the melody of “Just Friends,” the ballad Parker made famous with strings. He is neither sentimental nor overtly funky: his rhythmic displacements come off as natural as well as amusing. He’s a sprightly player.

Lauritsen also wrote some of the liner notes for Live at Montmartre. They include a modest allusion to conversation in which Cuber asks the organist if he can play the bop anthem “Cherokee.” Lauritsen answered yes — if it isn’t too fast. Cuber vowed that it would be … fast. On the recorded performance, the saxophonist begins on his own, playing the first two A sections at a tempo that the band could not escape. It had no choice but to step up. And “Cherokee” turns out to be a standout in this vigorous, intriguing set. Cuber manages to make the high-speed acceleration sound lyrical as well as virtuosic, and the band obliges with solos that come off as much more than your standard bop band running the changes. Drummer Svendsen accompanies Cuber with a tightly controlled sound (mostly sticks on hi-hat); the saxophonist pretty well marches to his own drummer until the tune’s climax. After that red-hot outing, Lauritsen recalls, “We felt that we had a tight unit.”