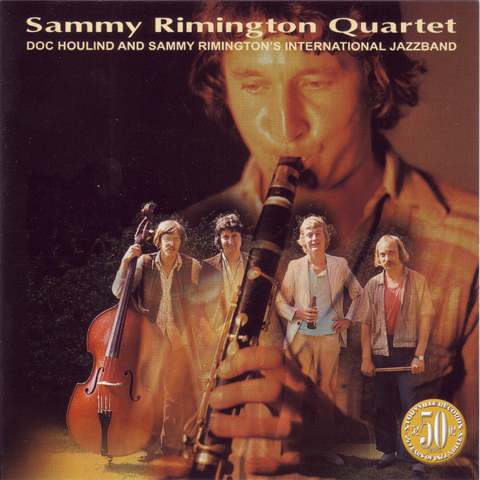 15 of the tunes on this CD were recorded in Copenhagen in 1974, 12 of which were originally released on LP. In addition, there are two live numbers from 1997, making a total of 17 tunes on this 56-min. CD. Sammy Rimington is an English clarinetist who plays in the best George Lewis/John Handy New Orleans tradition. On both sessions on this CD, Rimington is solidly backed by the prominent Danish Dixieland drummer Søren ”Doc” Houlind. There is a wonderful variety of music performed on this CD, including ancient New Orleans classics like John Handy’s ”Cap’s Blues”, French gypsy jazz guitar master Django Reinhardt’s ”Nuages”, popular tunes like ”Red Sails In the Sunset”, and religious songs like ”An Evening Prayer”. The intense drive and outstanding musicianship on this CD is a joy to hear – it is New Orleans music at its best.

I Saw Stars Gipsy I'm Looking Over A Four Leaf Clover At The Cross Yes Sir, That's My Baby Just A Blues High Society Nuages Dancing With Tears In My Eyes Honey You Can Depend On Me Red Sails In The Sunset Clouds A Porter's Love Song Coquette An Evening Prayer Caps Blues