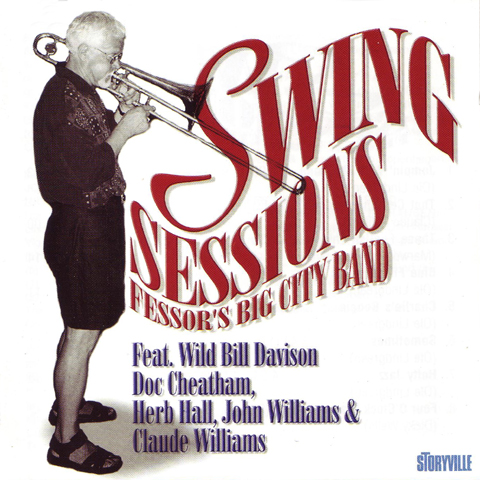 Thanks to Fessor’s long-time friendships with many top swing and trad jazz stars like Wild Bill Davison, the musical communication and overall atmosphere on this CD is greatly enhanced, and the musicians really swing together. Fessor’s trombone style is warm, and robust, and his arrangements are simple and well constructed. The music always sounds fresh, thanks both to Fessor’s deep attraction to a variety of musical styles, and to his choice of a relatively unusual repertoire. There are great performances by special American guest artists Claude Williams on violin, Herb Hall on clarinet, Doc Cheatham on trumpet, and Wild Bill Davison on cornet, plus Danish Tenor saxophonist Bent Jædig. This 65-minute CD is compiled from five recording sessions in Denmark with Ole “Fessor” Lindgreen and (mostly) his Big City Band, from 1978-1981. Eight of the 15 numbers are Fessor originals, six are standards, plus one gospel classic.