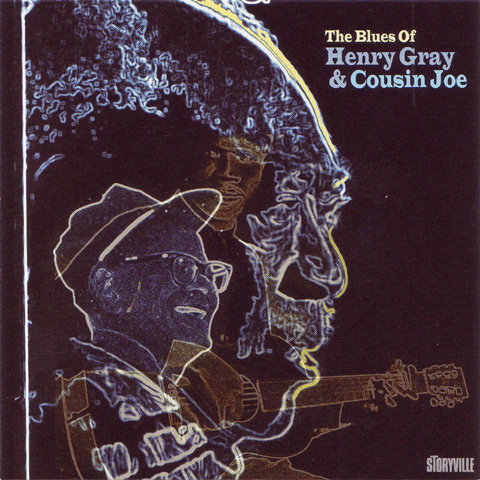 This CD consists of two separate live solo performances, recorded in New Orleans in 1984, with Louisiana pianist/composer/singers Cousin Joe and Henry Gray. Both were born around New Orleans, learned to play their instruments at a very early age, left town for many years (Joe to New York, Henry to Chicago) and wound up living and playing in Louisiana. On this CD both musicians display a hard-driving, rhythmic piano style, and their vocals contain some pretty funny lyrics. Five of the nine tunes by Henry Gray are original compositions, plus tunes by Fats Domino and Jimmy Reed (with whom he played in Chicago). The session with Cousin Joe includes some of his best-known compositions, like "Beggin’ Woman" and "Ain’t So Such A Much" which feature very clever, ironic lyrics. Henry Gray plays a wonderful, tough, two-fisted Chicago-style piano, blended with New Orleans r & b exuberance. Listening to the music of these two men, there’s no doubt you’re hearing honest, authentic, down-home blues from two cats who have really been around and seen a lot.

Blues Dance Cold Chills Come On Woman Bright Lights, Big City Ain't No Use Shake A hand Boogie Blueberry Hill I'm In Love Again I Don't Know My Name Everything That's Made Of Wood Once Was A Tree Come Down People Married Life Life Is A One Way Ticket Beggin' Woman Hard Work I Wouldn't Give A Bllind Sow An Acorn Prodigal Son