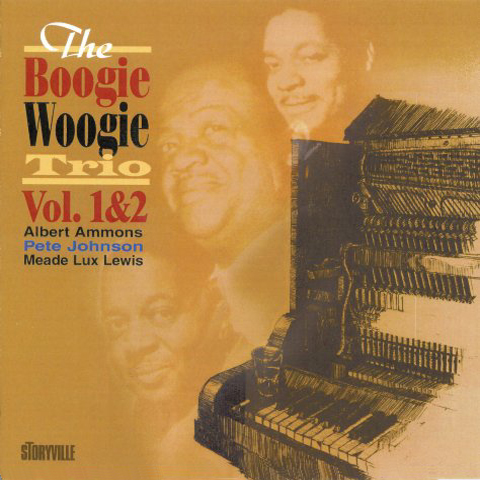 All 45 tunes on this two-hour double CD consist solely of the boogie woogie piano playing of Pete Johnson, Meade "Lux" Lewis and Albert Ammons – there is no bass, drums or horns. 7 of the tunes are previously unreleased; the rest have been released on Storyville LP’s # 183, 184, 229 & 273. The music on Volume 1 is taken from radio transcriptions recorded in 1944, 1947 & 1954-54; Volume 2 is entirely from radio transcriptions from the Sherman Hotel in Chicago in 1939. Most of the tunes are solo piano, ten tunes are duets with Ammons & Johnson, one is a duet with Ammons & Lewis, and two tunes are with all three pianists. Brought together for the first time and made famous by John Hammond at the historic "Spirituals to Swing" concert at Carnegie Hall in 1938, Albert Ammons, Pete Johnson & Meade "Lux" Lewis went on to become the greatest and most popular boogie woogie pianists of all time. While their playing styles were different, all three possessed enormous swing, drive and power.Here is two hours of the best boogie woogie ever recorded, performed by the three best boogie woogie pianists of all time – two hours of music and rhythms where you won’t be able to sit still!