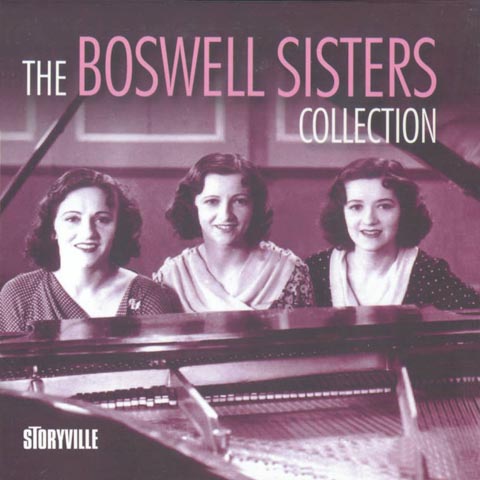 THE BOSWELL SISTERS The Boswell Sisters inauspiciously launched their recording career in New Orleans, their hometown, on March 22, 1925, but their first release, I’m Gonna Cry and Nights When I’m Lonely didn’t shake any rafters. Early local appearances featured Connie, the eldest, on cello, Helvetia ("Vet") on violin, and Martha at the piano, but the city’s jazz environment made Connie and Vet switch to saxophone and banjo, respectively. At first, the singing was almost incidental, but it became their ticket to national attention five years later when they moved to New York and became a fixture on radio shows. The Boswell Sisters were notable for their tight harmony as well as their unique ability to modulate pitch and give familiar songs a new melodic twist. They were the cutting edge that inspired future groups, including The Andrews Sisters, who began their own career by emulating them, even down to their Southern accent. The exuberant sisters recorded a string of hits in the 1930s, sometimes teaming up with fellow vocalists, such as Bing Crosby and The Mills Brothers. Instrumental accompaniments are by some of the day’s most popular musicians and bands, including The Dorsey Brothers, Don Redman, Red Nichols, and Benny Goodman. Considering their popularity and impact, the sisters had a relatively brief run, disbanding in 1936 when Martha and Vel married outside of the music industry and decided to give priority to family life. Connie, however, continued and enjoyed a successful solo career. This boxed set contains the entire Boswell Sisters output of commercially released recordings—a remarkable set of performances that paved the way for the vocal trio genre. It also includes a bonus DVD featuring more extraordinary performances.

“This is a very impressive package of 5 CD’s and a DVD from Storyville in Denmark. I would think this is the complete output of the three talented sisters. They were the pioneer group of this type of group-jazz singing and set high marks for anyone to follow. The personnel is shown in a group and if you need better discographic information, I would refer you either to Brian Rust or Tom Lord. Also, the booklet in this box of discs has a complete discography, plus a well-written text by David W. McCain. There are some fine photographs scattered around in this package to sweeten the need for this issue. The sound quality is fine, considering the period when these were first as recorded with only one pre-electric recording. I shall not go into detail of the various tunes but sufficient to point out that these record ings stem from the great depression years. This means that at that time sheet music was outselling records. It was strictly an economical need yet even in this environment, the Boswell Sisters had one hit after another. Another point is that when you look over these tunes you notice that some soon fell off the horizon while others are with us today. I cannot say that the fault is always the quality of music, although in some cases it is obvious - maybe it is more about the topic. The same can be said when you look at the many musicians associated with the music. Some went on to great fame, others a rather successful career and some into obscurity. That fact only makes this issue all the more valuable. I am convinced that we must remember all of these tunes and artists and the times in which this music was created. The DVD has some interesting moments although the farm scene is a bit corny and dated. There is a newsreel of the sisters singing for some congressman, can you imagine that? Then there are some movie scenes featuring the 3 ladies. The quality of picture varies but it is nice to have. I would easily recommend this set of recordings. It is period music in places and at other times it is timeless. It is a history of three young ladies who contributed a lot to the jazz scene.” Herb Young, IAJRC

Wha'Dja Do To Me? When I Take My Sugar To Tea Roll On Mississippi, Roll On Shout, Sister Shout Sing A Little Jingle I Found A Million Dollar Baby It's The Girl It's You Making Faces At Tha Man In The Moon I Can't Write The Words Shine On Harvest Moon Heebie Jeebies River Stay 'Way From My Door An Evening In Caroline Nothing Is Sweeter Than You I Thank You, Mr. Moon Was That The Human Thing To Do? Put That Sun Back In The Sky Stop The Sun, Stop The Moon Everybody Loves My baby There'll Be Some Changes Made Between The Devil And The Deep Blue Sea If It Ain't Love Got The South In My Soul