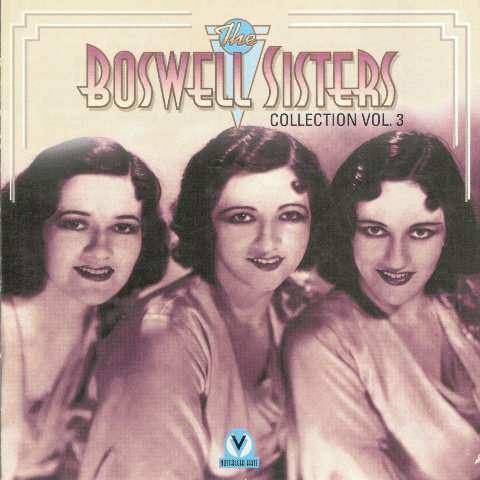 The Boswell Sisters were schooled in the classics, with Martha on the piano, Connie on cello and Helvetia on violin. But growing up in 1920s New Orleans exposed tliem to jazz, with Connie switching to sax and Vet to the banjo. Radio made the Boswell Sisters household names in the United States. They sang like no tliree voices had before. Even though countless vocal gro up s were influenced by them and others tried to imitate them, no one ever came close to matching the hannony, rhytlim, exuberance, feeling and sheer musicianship of New Orleans' own Boswell Sisters. This remains true today. Their heyday was brief, five short years spamiing from 1931 to 1936. But during those years they were able to create a stan­dard of excellence that has never been equalled. Their music has stood the test of time and is being appreciated by new admirers all over the world.

Was That The Human Thing To Do? California Medley Pt. 2 Lawd You Made The Night Too Long "OK, America!" Medley Pt. 2 "OK, America!" Medley Pt. 1 Doggone I've Done It Hand Me Down My Walkin' Cane Old Yazoo We Just Couldn't Say Goodbye Sleep, Cpme On Take Me Down Among The Sheltering Palms Down On The Delta Charlie-Two Step Sentimental Gentleman From Georgia It Don't Mean A Thing Louisiana Hayride Minnie The Moochers Wedding Day Crazy People Mood Indigo Forty-Second Street Shuffle Off To Buffalo