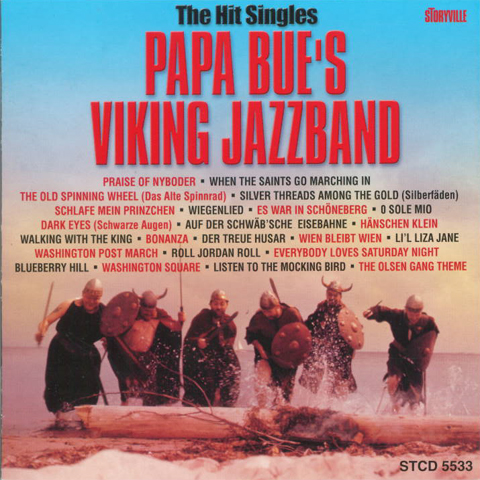 This compilation represents Bue classics – originally released on singles (45’s) in the period 1958-69 – issued on CD here for the first time. The music here is very diverse, including folk songs, light classical music, TV and movie themes, gospel, spirituals, German children’s songs, and European and American evergreens. Already way back in 1958, with the release of their smash single, “Schlafe Mein Prinzchen” (which sold over a million copies), Papa Bue’s Viking Jazzband was on its way to becoming one of the best and most successful traditional jazz bands in Europe. Inevitably, their fame also spread to the U.S. Many Bue aficionados claim that the band’s golden years were the 1960’s. Much of this had to do with trumpeter Finn Otto Hansen’s joining the band in 1958. His lyrical, yet powerful, inventive and technically brilliant style definitely enhanced the quality of the band’s music. The enthusiasm which had always been there – led by Arne Bue’s no-nonsense, Kid Ory-style trombone playing – was lifted up by a new smoothness and precision in the band as a whole, and has been the Viking Jazzband’s recipe for success ever since.