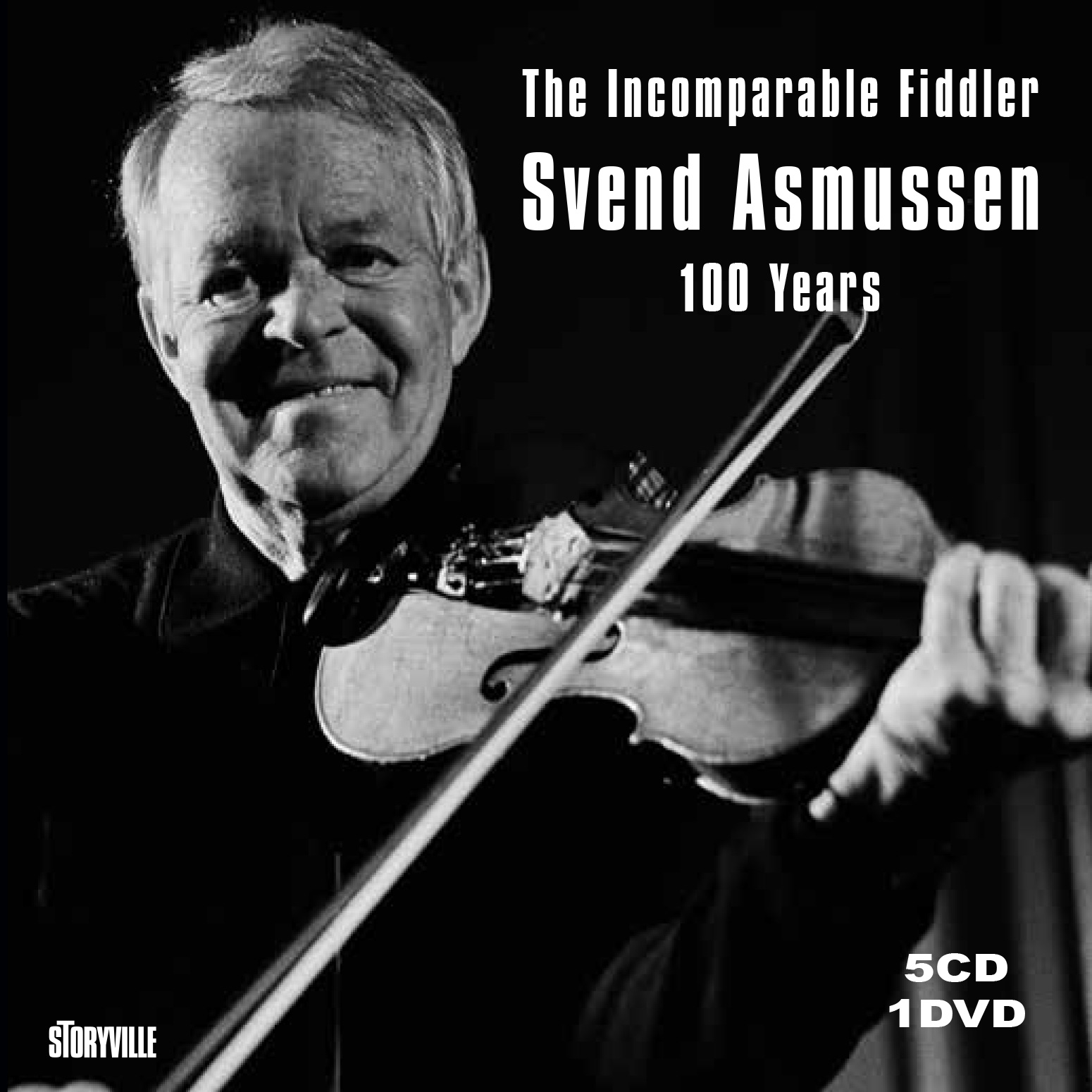 Danish customers can purchase the box set though this link:  http://www.exlibris.dk/product.asp?product=591

Svend Asmussen celebrates his 100th birthday on February 28, 2016. Storyville Records celebrates the Danish Jazz legend's centenary with a 5 cd + 1 dvd box set which explores his musical production through the years.

“Svend Asmussen is light, precise, and yet profound; a consummate entertainer, a creative thinker, and an artist. And that combination is rare!” (Finnish jazzviolinist Ari Poutianinen, Jazz Special 149)

Listen to excerpts of the tracks from CD2, "Rhythm is Our Business" in the right side of this page!

The first CD features early 1937-1944 recordings, where Asmussen finally decided on music as his occupation for life and began gaining international recognition with his elegant swing and refined arrangements.
The second CD features 1953 and 1958 recordings from Hamburg, where Asmussen’s profound musicality and jazz skillfulness shine.
On CD3, Asmussen collaborates with violinist colleague Stephane Grappelli, and their different phrasings compliment each other. We also find previously unreleased tracks from a 1985 Paris session with the Georges Arvanitas Trio, a complement to the critically acclaimed “Embraceable” concert CD from the same occasion.
On CD4, Asmussen and American legend Stuff Smith play a concert together in Copenhagen, the two clearly enjoying each other’s company.
CD5 features the renowned 1996 concert “Fit as a Fiddle”, where Asmussen masterfully combines the insistent energy of his youth with the experience and musical grandeur he has gained from a lifetime of playing.
On the DVD, Asmussen plays a lively 1986 concert in Copenhagen’s famous Jazzhus Montmartre with prominent musicians such as bassist Niels-Henning Ørsted Pedersen and pianist Kenny Drew.

"There's no doubt that Svend Asmussen is a candidate for the title as Greatest Jazz Violinist of All Times along with a small handful of instrumental colleagues. In short, Svend Asmussen is a phenomenon. It is a great pleasure to be able to explore this treasure chest with svend Asmussen in so many different settings, both studio and live, and with picks from his whole career." - Jazz Special, #149.

Violinist Kristian Jørgensen on Svend Asmussen: "For Svend, the melody and harmony are the most important things in the music. His improvisations can be played on all instruments and still sound interesting. I think he is the greatest of them all. He possesses a very fine mix of Joe Venuti's virtuosity, Stuff Smith's rhythmical power and Grappelli'ss elegance. He hits the perfect golden ratio"


Professor in comparative litterature, Hans Hertel: "Svend Asmussen has contributed to the great emancipation project  as a playful virutous. And even though he didn't belong to the cultural-radical garde, he has played some of the same strings"

Svend Asmussen on playing the 1985 "Embraceable" concert in Paris with bassist Georges Arvanitas (included in the box): "I can still feel the spirit that came from playing with him and the other two in that small club. It was a concert I can be nothing but happy about having been a part of. I hope everyone kan feel the same when they listen to the CD"

"Danish jazz history would have looked a whole lot different, if Svend Asmussen had followed his father's advice and become a dentist. But it was the music the young Asmussen lived for, and he debuted at only age 17 with his own quintet. Svend Asmussen is a legend on the Danish jazz scene".

"Both curiosity and an aversion against routine has kept [Svend Asmussen] going. Self criticism has, in short, always been a part of the drive towards the 100 years, and uncompromising work and a never failing conscience that that an audience is entitled to an experience, has been part of the ingredients".

"It isn't the 100 years that has given Svend Asmussen the recognition he now holds: That of a legend. It is his intensity and diversity. He has been a singer, a multiinstrumentalist, a composer, an actor, a showman, a sound technician, a painter and so on. And always with his perfectionism intact, as a very personal twist".

"The sound quality is very high all the way through and the DVD is professionally made. The violin talks, cries and laughs and Svend Asmussen is in his very best of playing moods on, for example, the 1996 recording. The film is of a fine length and mad ewith a genuine care for the music, in other words: The cameras really are on the cutting edge of the beat!".

You can read the article here: http://www.allaboutjazz.com/php/article.php?id=53064

"Although hardly comprehensive, this album is a wide-ranging survey of the very fertile jazz career of one of swing's pioneers whose career lasted through the 20th century... Asmussen ceased playing - at least publicly - in the early 21st Century, but this collection proves that he played with undiminished swing and inventiveness into his ninth decade.. Along the way, we get to see the violinist at his swinging, inventive best, interagting with Kenny Drew's elegant bop/swing piano and especially with NHØP"

This is another set not to be missed. Highly recommended.

"The greatest jazz violinist you have (probably) never heard of... I recommended back in 2009 that those who want to share my discovery of this amazing musician get the Shanachie DVD. Now I can recommend this box set just as highly!"