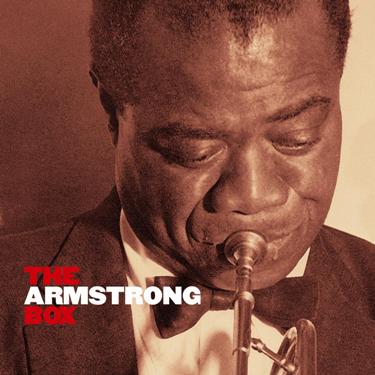 This box makes Louis Armstrong's All Stars period come alive again with a variety of tracks spanning the years 1947 to 1967. Surrounded by top-flight musicians such as Earl "Fatha" Hines, Jack Teagarden, Sid Catlett, Trummy Young, Milt Hinton, Edmond Hall and Tyree Glenn, you'll hear Armstrong in live settings ranging from nightclubs in New York and Chicago to concerts in Denmark and France to one-nighters in small-towns such as Ephrata, Pennsylvania, putting on a wonderful show wherever he went. In addition to containing many previously unreleased tracks, there is also a DVD capturing some of Armstrong's finest moments from television in the 1950s, including meetings with Dizzy Gillespie, Jack Teagarden and Hoagy Carmichael. So let the old myths die and rejoice in the timeless, swinging and ceaselessly entertaining music of Louis Armstrong and His All Stars. Oh yeah!

“When Ralph Waldo Emerson wrote in ”Self- Reliance”: ”To be great is to be misunderstood", he could have been thinking of trumpeter Louis Armstrong. Even in Armstrong's lifetime, his work was reconfigured by journalists and critics into Early Promise, Great Peaks, Sellout to Commercialism, Lengthy Decline. This seven-CD set, tracing Armstrong's 1947-67 live small-band performances, reminds us that the Sellout and Decline were fallacies created by those who could not understand that Armstrong could be simultaneously popular and creative. He said he was playing better in his 40s and 505 than in his ‘Golden Era’ and trumpeters like Randy Sandke, Ion Faddis and Wynton Marsalis agree. The set begins with recordings that predate the ‘official’ start of the Armstrong All-Stars - a small group formed when big bands everywhere cost too much to sustain. They feature splendid work by Bobby Hackett, Jack Teagarden, George Wettling and others associated with Eddie Condon. From there, the set follows the aptly-named All-Stars, who began as Teagarden, Barney Bigard, Earl Hines, Arvell Shaw, Big Sid Catlett, Velma Middleton and their later replacements, as they toured the world until Armstrong's death in 1971. Throughout, Armstrong's energy and joie de vivre are evident on slow blues and novelty numbers, jazz classics, show tunes from ”St. James Infirmary” to "You'll Never Walk Alone" to his hits ”Mack the Knife", ”Hello, Dolly” and ”Cabaret”. He treats "The Dummy Song" and ”Auld Lang Syne” as if they were jazz classics ”Mahogany Hall Stomp”, ”High Society", "Muskrat Ramble” or ”The Bucket’s Got A Hole in It”. When the personnel changed, a few later sidemen are competent rather than inspired, but one cannot fault Edmond Hall, Trummy Young, Joe Muranyi, Billy Kyle and others. These discs are a priceless document of a durable working jazz group, rare even then. Some of the most heartwarming moments are when we hear the crowd (in a club or concert hall) go wild, demanding encores. Audiences did not condemn him for ’showmanship’, ’entertainment’, or ‘Uncle Tomming’; they were too busy clapping and cheering. Oddly, the critics who spoke so sharply of Armstrong's ”clowning” and ”pandering” to audiences rarely wrote so harshly of Duke Ellington, Charlie Parker and others not above ’showmanship’. The set ends with a DVD of 1958-59 television appearances, with Armstrong alongside Lionel Hampton, Anita O’Day, an exuberant Dizzy Gillespie, Hoagy Carmichael and others. In the last 50 years, Armstrong's later work has often been issued, but with inadequate or deceptive annotation and in poor sound. One of the best aspects of this set is the stewardship of jazz scholar and Armstrong authority Ricky Riccardi, who has shared performances new to devoted collectors and provided a fine narrative that is a brief overview of his book, What a Wonderful World: The Magic of Louis Armstrong's Later Years (Pantheon, 2011). Riccardi’s devotion is not idolatry: one of the most fascinating segments of the set is a 1967 Copenhagen concert where Armstrong plays heroically even as his embouchure occasionally betrays him. The sound on this set is clearer than ever before, so that new details await the most experienced Armstrong collector. As for the canard that Armstrong played the same solos every night, the 15 widely-spaced versions of ”When It's Sleepy Time Down South” are master classes in improvisation, phrasing, subtlety and feeling. One comes away from the seven CD5 convinced that Armstrong wholly gave himself in what he called ”the cause of happiness” and that audiences felt that joy. The set also shows a mature artist dealing with popularity and reminds us of the sheer physicality his public appearances required. Armstrong comes through, subtle and forceful, a great improviser, hardly in the twilight of his career, not in a Lengthy Decline. This is an in-depth study of creative energy over a long period of time by someone who merged ‘high art’ and ’low art’ so beautifully, simply because he found such divisions irrelevant.” Michael Steinman, New York City Jazz Record

“Last summer, Universal Records and Sony BMG released Louis Armstrong's great recordings from the 1920s to the 1960s in a 10-disc collector's box. One of its highlights was a 1956 live show by the trumpeter with his postwar All Stars sextet - and that very significant but often-misrepresented group is the sole focus of this seven-CD set spanning the years from 1947 to 1967. (It also includes a DVD of 1958-59 TV clips, featuring such guests as George Shearing and Dizzy Gillespie.) The All Stars toured constantly for two decades of a still-effervescent Armstrong's middle-age, and did much to fuel the worldwide renaissance of traditional jazz after the second world war, and this set represents the grueling schedule of small-town one-nighters and radio shows as well as glitzy concert gigs. Highlights include a well-recorded 1949 Hollywood live show featuring pianist Earl Hines, drummer Sid Catlett and the sublime trombonist/ singer Jack Teagarden, and the hard-swinging later All Stars lineup caught at New York's Basin Street in 1956. There's inevitably a lot of hammy showmanship, the repertoire and the solos get repetitive, and Armstrong buff Ricky Riccardi's liner notes emit more heat than illumination. But the leader's trumpet variations on a huge repertoire of songs are consistently majestic, his singing irresistible, and his devoted commitment to his art and his audiences is plain throughout this absorbing collection. “ John Fordham, The Guardian

occasion, with a touching version of “Cabaret.” The bonus dvd has some of Armstrong’s best performances from the late 50s. Jack Teagarden shows up for a couple of tunes, most notably “Saint Louis Blues,” and Armstrong is in rejuvenated form throughout material with artists ranging from Chubby Jackson/b, Cozy Cole/dr, Edmond Hall/cl and an all star team headed by Lionel Hampton that includes (take a deep breath) Gerry Mulligan, Gene Krupa and George Shearing, as well as the previously mentioned gents. A session with Ellington’s orchestra sounds more Wagnerian than jazz, with screaming trumpets galore, but all is forgiven with the inclusion of the CLASSIC summit meeting between Armstrong and Dizzy Gillespie, performing “Umbrella Man.” Humor, chops and even Satchmo’s classic reaction to Gillespie’s spit landing on his face are all the essence and beauty of jazz, and should not be missed by anyone. Armstrong has always been criticized for not musically “changing with the times.” But to his defense, I’d like to quote from the great theologian GK Chesterton, “We worship the new instead of the eternal. The notion of every generation proving the last generation worthless, and is in its turn proved worthless by the next generation, is an everlasting vision of worthlessness.” Enjoy the timeless beauty of this music, just as you would a Mozart or Hayden, who also preferred timeless quality to musically “changing with the times.” George Harris, Jazz Weekly