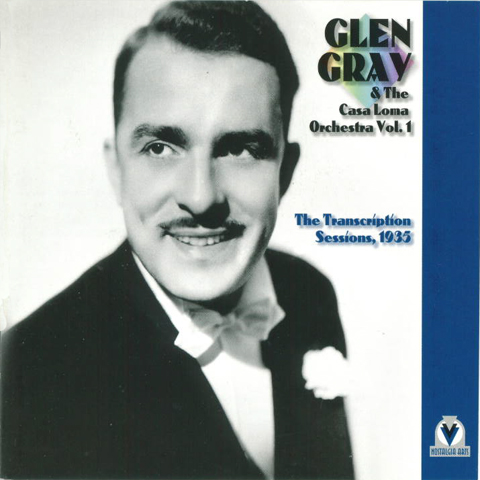 The Casa Loma Orchestra was one of the first white swing bands, a precursorto the Swing Era and Benny Goodman. The 25 tunes (70 minutes) on this CD were radio transcriptions from 1935, recorded at the time solely for radio broadcast. The musical style varies between hot swing jazz and smooth dance music. The arrangements by Gene Gifford (who also composed some of the tunes) feature intricate phrasing and

high-energy performance, and are quite complex. The repertoire is drawn mainly from popular tunes of the day, including compositions by Cole Porter and Rogers Hart, but also includes "oldies" from as far back as the late 1800's. Several of the tunes have never previously been released, and none have been released on CD before now.

Glen Gray and others.

Smoke Rings Stompin' Around The Continental Chinatown, My Chinatown Carry Me Back To Old Virginny Black Jazz For You The Little Man With The Hammer My Country Walkin' The Dog Lady, Be Good Bugle Call Rag I Never Knew Limehouse Blues Blue Room The Maniac's Ball Basin Street Blues Who's Sorry Now? Under A Blanket Of Blue Love And A Dime Song Of Tje Islands Sunny Disposish Night And Day What's The Use? White Star Of Sigma Nu