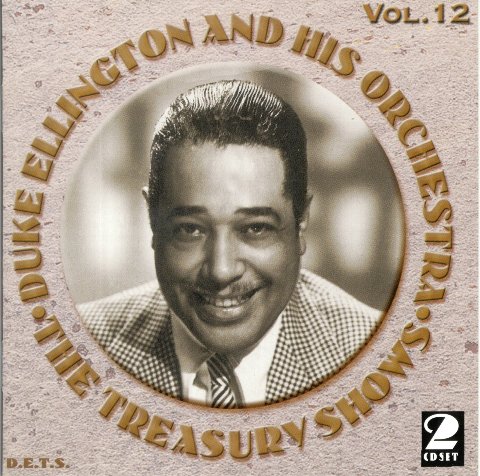 This is volume 12 of Duke Ellington "The Treasure Shows" Jerry Valburn is the producer of the DETS series which will result in 24 double CDs at its completion. It contains Treasury Broadcast 22 recorded September 8, 1945 and Treasury Broadcast September 15, 1945 plus a Broadcast from the New Zanzibar New York recorded October 1, 1945. This is first time the music is released on CD. The repertoire consists mostly of Duke Ellington and Billy Strayhorn compositions. The Rogers and Hammerstein hit If I Love You is an arrangement by Billy Strayhorn who plays piano the vocal by Kay Davis. Emancipation Celebration from Ellington's suite Black, Brown and Beige has fine solo work from Rex Stewart. The double CD contains 35 numbers/120 minutes and many fine solos played by the famous Duke Ellington musicians.