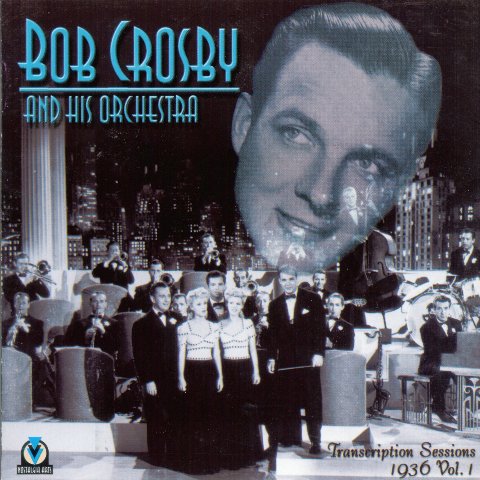 This CD contains 20 dance music tunes recorded as radio transcriptions in 1936. The tunes were all popular melodies at the time, including many from film musicals, plus dixieland and swing favorites. The Bob Crosby Orchestra was unique for the period (mid-1930’s) and created a vivid contrast to the more structured major swing bands of the era, such as Benny Goodman, Artie Shaw, Tommy Dorsey and Glenn Miller. Fuelled by the tight arrangements of Deane Kincaide, Bob Haggart and Matty Matlock, the band skilfully blended the basic jazz elements of the 1920’s with the commercially successful swing music of the 1930’s. The orchestra’s ability to “crossover” from a jazz concept to the music of Tin Pan Alley kept the Crosby Orchestra at the forefront of the swing era. Their delicate balance between the “hot” and “sweet” style attracted a wide variety of fans.

Summertime Old Man Mose The Touch of Your Lips I Don't Want to Make History It's Been So Long In a Sentimental Mood Somebody Ought to Be Told Alone Here Comes Your Pappy Island in the West Indies Wake Up and Sing Let's Face the Music and Dance I'm Putting All My Eggs in One Basket At the Codfish Ball What's the Name of That Song? Looka-There, Ain't She Pretty? A Melody from the Sky Time on My Hands Savoy Blues I'm Coming Virgina