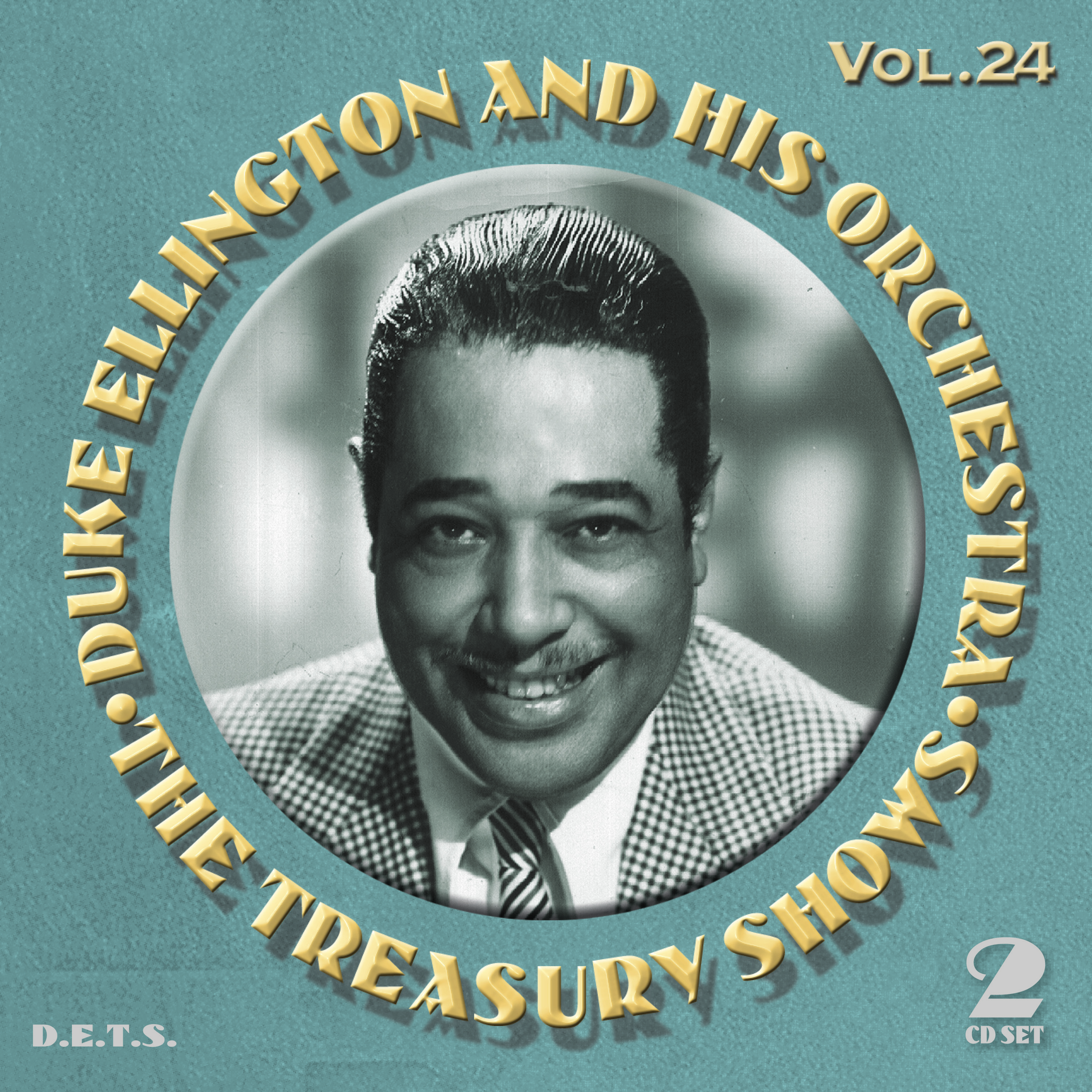 Storyville Records presents: Volume 24 in the Duke Ellington Treasury Shows series, now approaching the end of this collectors’ special broadcast series. In April 1945, to promote the sale of war bonds, the US Treasury Department contacted Duke Ellington to do a series of 55 min public broadcasts. These sessions would give Ellington a wide choice of material to perform including his older work; new instrumentals and pop tunes and his extended works as well.

This double CD contains a series of different radio NBC broadcasts from the famous Blue Note club in Chicago, Illinois from the summer of 1953. The CD set also incudes a bonus recording from April 1944, a MBS broadcast from the Hurricane Restaurant in New York City. The broadcasts are featured complete with radio speaks and encouragements to buy bonds read by The Duke himself, plus bonus material and liner notes.

Ulf W. Lundin, writer of the liner notes, explains: “With this volume of the DETS series, we jump seven years ahead in the life and career of Duke Ellington. Volume 23 ended with a broadcast form the Aquarium Restaurant in NYC, 1946. Now we are in Chicago, Illinois, at the Blue Note and in 1953.” The Second World War had ended, and the “swing era” was also coming to a halt, as musical tastes had changed. Many big bands disbanded, and in 1953, Ellington was the only big band leader still playing. His popularity wasn’t what it had been in the mid-40’s, but the emergence of jazz clubs like Blue Note, Birdland and Storyville helped him find engagements and play for a more listening than dancing audience. Furthermore, the clubs were well-connected with radio stations and networks, allowing for the Treasury Show tapes to come to life.

The broadcasts on CD 1 from 1953 are the first ones in the DETS series without U.S. Government bond promotion, and were transmitted in the NBC “Music For Modern” series. The Blue Note broadcasts begins with Clark Terry, “the phenomenal trumpet player” on “Harlem Air Shaft”, and continues with classics such as “Jump for Joy”, “Satin Doll”. There’s also “a little bit nostalgic reaching back into the roaring 20’s”, as Duke says on the tape, with the romantic baritone Jimmy Grissom singing “Is It A Sin?”. It differs from other recordings from this time, among other qualities, by having  Willie Cook play an extraordinarily sweet-sounding trumpet and Ray Nance on trumpet bursting through the soundscape. The broadcasts are less superficially flamboyant than some of the studio recordingd by Duke at the same time, and therefore more intense and thus effective.

CD 2 includes two broadcasts from the “All Star Parade of Bands” series played at the Blue Note, Chicago. NBC launched this series in early 1953 together with the United Federation of Musicians to use jazz and other popular artists to promote the Treasury Departments Savings Bond Program. From July 1953 at the Blue Note, we’re treated to live versions of “Caravan”, “The Tattooed Bride” plus Ellington recounting the story behind the song for the audience, and the hit single “Flamingo”.

Duke Ellington and His Orchestra - for details of all personnel see liner notes.

Contact us via e-mail for purchase. Physical CD release only.

Serious Duke Ellington collectors will want all
of the CDs in this vast series.
Scott Yanow

If you want to discover or rediscover Duke Ellington these 140 minutes is a present.