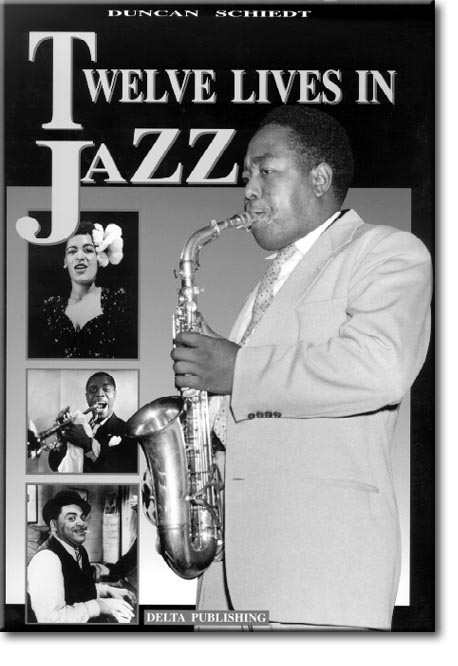 "... Let me say straight away that Twelve Lives In Jazz is a most worthwhile book, produced with great care and affection by veteran jazz photographer Duncan Schiedt. It is primarily a pictorial volume dedicated to the "masters who gave birth to the music known as jazz, the form that would define popular culture for the 20th Century" ...And you can’t really quarell with Duncan’s dozen - The Empress, Lady Day, Bix, Satchmo, Jelly Roll, Fletcher, Duke, Fats, the Chairman, B.G., Bean and Bird... What makes Twelve Lives In Jazz particularly commendable is the excellent selection of black and white photographs, both in terms of historical interest and quality of reproduction. The Fletcher Henderson chapter revives the nice story about Satchmo; Henderson was conducting a rehearsal and at one point the arrangement called for a rapid diminuendo. As Scheidt writes, "All but Louis complied, and the cornetist blazed on at full volume until rapped to silence by the irritated leader, who said, "In this band we not only read the notes, we observe the marks. Don’t you know what pp means?" To Which Louis, after a moments hesitation replied, "Sure, it means pound plenty, right?" Henderson and the band broke up in laughter." As well as being an attractive book to look at, Twelve Lives In Jazz is also a good read. Highly recommended..." Mike Hennessey Crescendo and Jazz Music Soft cover, A4, 176 pages, illustrated