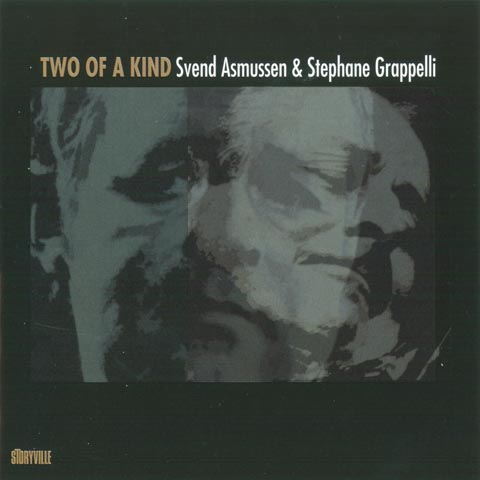 Two Of A Kind

This 57-minute CD (12 tunes) includes four numbers that have never previously been released. The recording (originally released on Metronome and later on a Storyville CD) was made in the recording studio in Copenhagen in 1965. The four extra tunes are from a radio broadcast the same year, with a different rhythm group. Besides Svend Asmussen, both sessions also feature another major jazz violinist, Stephane Grappelli, who first played with Asmussen in 1938. The musical material consists of popular swing standards by Duke Ellington, Fats Waller and George Gershwin, among others, plus one be-bop tune by Bud Powell.Svend Asmussen plays here with all the elegance, charm and perfection that have been the trademark of his music for many, many years. Two of the top jazz violin-pros in the business, Grappelli and Asmussen obviously enjoy each other’s playing and respect each other as musicians. The music swings like mad, not least of all thanks to a fantastic Danish rhythm section, led by bassist Niels-Henning Ørsted Pedersen and drummer William Schiøpffe. Listening to this CD is guaranteed to put you in a good mood!